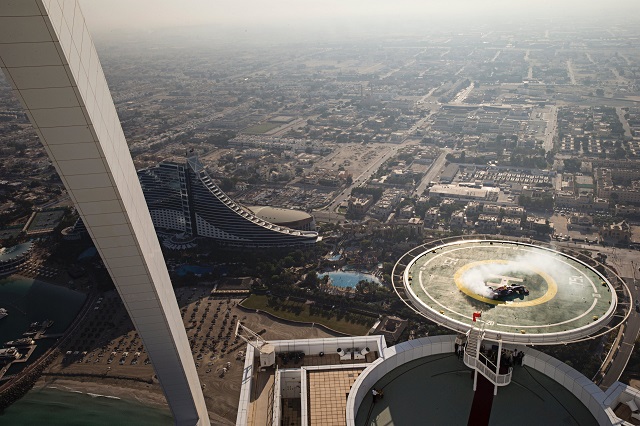 Just days after clinching both the Drivers’ and Constructors’ World Championships for the fourth time in a row, Infiniti Red Bull Racing celebrated their record-breaking achievement in style on top of the Burj Al Arab Helipad.

Tiger Woods has played golf from the helipad, Andre Agassi and Roger Federer playing tennis on it and now it was David Coulthard’s turn to take a Formula One car up there. Coulthard took the Red Bull Racing Show Car 210 metres above sea level to lay down some rubber on the famous 24 metre wide helipad.

“That was a lot of fun,” said Coulthard after the run. “When Red Bull first suggested the idea to me I said ‘why not?’. I like getting involved with anything that pushes the boundaries and it’s what Red Bull stands for. I think this will produce fantastic, iconic shots in an amazing town and I’m really privileged to be part of it.”

That was a lot of fun.

Her Excellency Laila Mohammed Suhail, CEO of Dubai Festivals and Retail Establishment, commented: “There could be no better way to both celebrate Red Bull’s recent win of the Formula One World Championship. Once again, images of one of Dubai’s most iconic landmarks will capture the imaginations of future visitors.”

The Red Bull Burj Al Arab rooftop show run was the perfect way to celebrate the team’s incredible achievement of the quadruple-double, after Sebastian Vettel became the youngest quadruple World Champion and Infiniti Red Bull Racing became only the third team to win four Constructors’ titles in a row.