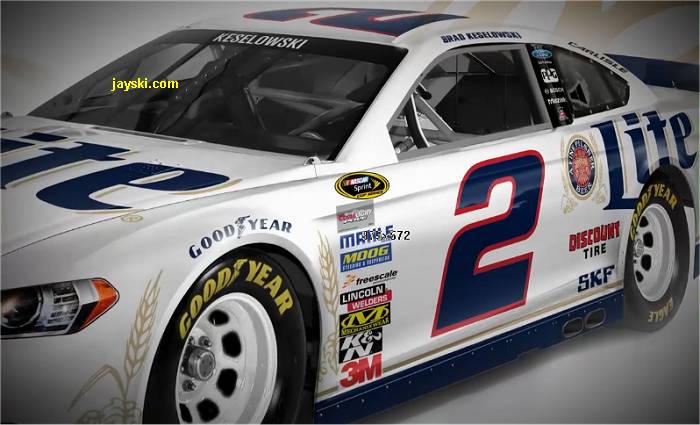 Brad Keselowski 2014 car images have leaked onto the internet. Supposedly Miller Lite will bring back the retro white Miller Lite can and run a promotion over the winter and as part of that promotion, Brad Keselowski will drive a white #2 Miller Lite Ford sometime in 2014. Possibly at the 2014 Sprint Unlimited at Daytona. See images of the new paint scheme of the 2014 #2 Team below.

Brad Keselowski (born February 12, 1984) is an American professional stock car racing driver and team owner. He currently races for Penske Racing in NASCAR, driving the No. 2 Ford Fusion in the Sprint Cup Series and the No. 22 Discount Tire Ford Mustang in the Nationwide Series. He is also the owner of Brad Keselowski Racing, which currently fields two full-time teams in theCamping World Truck Series. In 2012, Keselowski joined Bobby Labonte as the only NASCAR drivers to have won a championship in both the Sprint Cup Series and the Nationwide Series.

Keselowski formed his own race team in 2007. The team began competing in the Truck Series in 2008. Brad drove the No. 29 Chevrolet himself and earned the team’s first Top 10 finish.

In 2011 and part of 2012, Parker Kligerman drove the No. 29 Ram in the Camping World Truck Series for BKR. Kligerman finished 11th in points in 2011, but was released from BKR midway through the 2012 season, being replaced by Ryan Blaney. Ryan Blaney drove to the team’s first victory on September 15, 2012 at Iowa Speedway.

NASCAR CUP: Top Ten Signs You’re Not Cut Out To Be A Race Car Driver By Brad Keselowski (VIDEO)