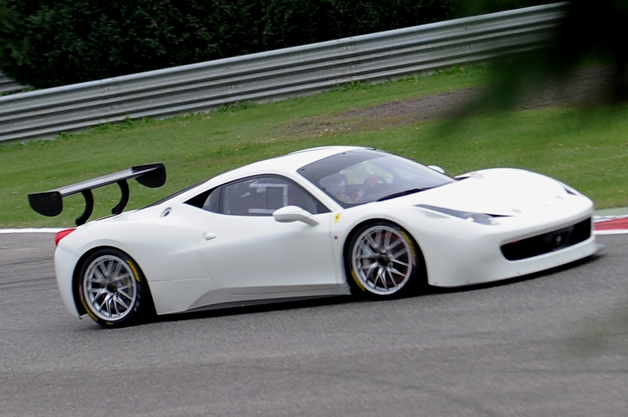 Ferrari makes road cars, it makes racecars, and it makes road cars into racecars. The Ferrari 458 Challenge Evoluzione falls into the latter category, transforming the 458 Italia into the basis for Maranello’s one-make spec racing series. It replaced the F430 Challenge in 2011, which in turn followed the 360 Challenge, F355 Challenge and 348 Challenge that started it all in the mid-90s.

Now the Prancing Horse marque is set to move the game forward again with the revised Ferrari 458 Challenge Evoluzione. Seen here undergoing testing at what could be any tree-lined circuit but is likely Mugello (which Ferrari just happens to own in addition to the Fiorano test track at the factory), the 458 Challenge Evoluzione takes a step further with a new aerodynamics package.

Other changes will likely be nominal, and Ferrari will probably offer existing customer racers the option of upgrading to stay at the front of the pack instead of replacing their $300k racers entirely. One way or another, Ferrari is set to unveil the Ferrari 458 Challenge Evoluzione, also at Mugello, after the conclusion this year’s Finali Mondiali, the event that ties up the end of Ferrari Challenge series from around the world next week.

Having completed its development on track, the launch of the Ferrari 458 Challenge Evoluzione is fast approaching as it will be shown to customers on 11 November at the Mugello Circuit, the day after the Ferrari Challenge Finali Mondiali.

Here you can see a photo of the car taken during testing. Its most striking feature is clearly the rear wing: the Ferrari 458 Challenge Evoluzione makes full use of the experience gathered in GT racing, in particular on the aerodynamic front. The increased downforce generated by the wing, balanced at the front by work carried out to the splitter and the floor, allows drivers to make full use of the 458 Challenge Evoluzione’s dynamics and performance, extending its limits and those of the driver, while improving performance both in terms of laps times and over long distances.