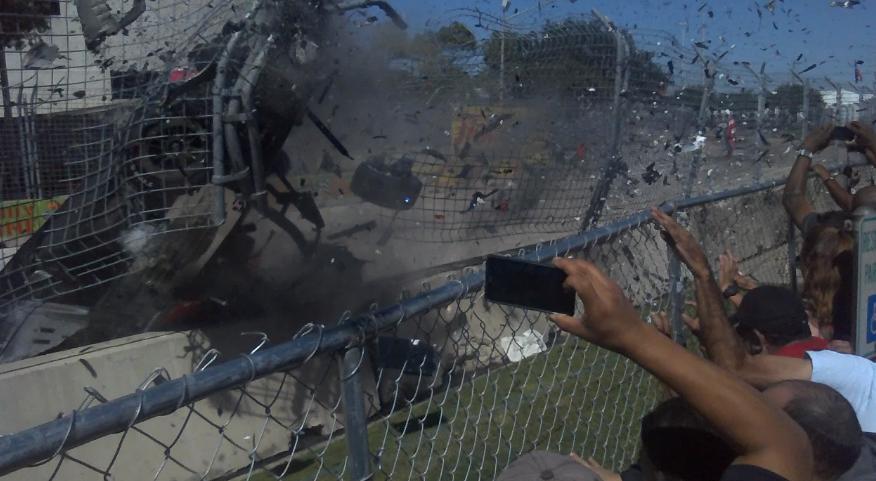 “Since my racing accident in Houston, I have been in the expert care of some of the leading doctors and nurses, all of whom have made my health, my safety and my recovery their top priority.  I am eternally grateful for the medical care I have received over the last several weeks.  I’d also like to thank my family and friends for their unbelievable support.

One month removed from the crash and based upon the expert advice of the doctors who have treated and assessed my head and spinal injuries post accident, it is their best medical opinion that I must stop racing.  They have made it very clear that the risks involved in further racing are too great and could be detrimental to my long term well-being.  Based on this medical advice, I have no choice but to stop.

Racing has been my life for over 30 years and it’s really tough to think that the driving side is now over.  I was really looking forward to the 2014 season with Target Chip Ganassi Racing, with a goal of winning a fourth Indianapolis 500 and a fifth IndyCar Series championship.

I’d like to thank all my fellow competitors, teammates, crew and sponsors for their incredible support over the course of this amazing ride.  I’d also like to thank Hogan Racing, Team KOOL Green and Andretti Green Racing for the opportunities to compete on the racetrack, and especially Target Chip Ganassi Racing, who have become like a family to me since I joined their team back in 2008.  I would be remiss if I didn’t thank all my fans around the world.  I can’t thank you enough for standing by my side for all these years.

I’ll forever look back on my time racing in CART and the IndyCar Series with fond memories and the relationships I’ve forged in the sport will last a lifetime.

Hopefully in time, I’ll be able to continue in some off-track capacity with the IndyCar Series.  I love open-wheel racing and I want to see it succeed.  I’ll be working with Chip to see how I can stay involved with the team, and with all the amazing friends I’ve made over the years at Target.

As my buddy Greg Moore would say, ‘See you up front’”

“Dario Franchitti has done so much for Target Chip Ganassi Racing so it will be very disappointing to not see him in our cars next season.  But simply put, Dario is a motorsports legend and will be sorely missed on the race track by everyone in the paddock and in the stands.  His contributions to the sport of motor racing are too many to list but I can tell you that they go way beyond what he has done on the track.  What’s both impressive and unique about Dario is that he has always been a student of racing, someone who not only appreciates the actual science of the sport but also the rich heritage of those racers that have gone before him.  This news only serves as the start of next chapter in Dario Franchitti’s racing career – which I expect will be here with Target Chip Ganassi Racing.”

“We have been proud to watch Dario emerge as one of the most exciting drivers in IndyCar, winning three series championships and becoming a two-time Indianapolis 500 winner during his time with Target Chip Ganassi Racing.  Not only has he had a storied career, but his popularity with Target’s guests, his tremendous contributions to racing and his engagement in our community giving efforts have made him an integral part of Team Target.  While we’ll miss seeing him drive behind the Bullseye, Dario will always be a member of the Target racing family, and we look forward to seeing him excel in the next phase of his career.”

Franchitti joined Target Chip Ganassi Racing in 2008, and in just five seasons delivered two Indianapolis 500 wins (2010 and 2012), the first-ever run of three-consecutive IndyCar Series titles by a Target driver (2009-2011), 13 Indy car wins, 16 pole positions and a win in the 2008 Rolex 24 At Daytona.  He finished the 2013 IndyCar Series season with four podiums, seven top-five and 11 top-10 finishes, and his four pole positions were more than any other driver this season.

Overall, Franchitti made 265 career Indy car starts.  His four championships are second only to AJ Foyt on the all-time list, and he is only the third driver in Indy car history to win at least three consecutive titles.  Franchitti became one of only five drivers to win the Indianapolis 500 and the series title in the same season more than once.  His 92 podiums place him fifth, his 119 top-five finishes place him tied for sixth and his 29 second-place finishes rank him 10th on the all-time lists.  In 2007, Franchitti became first professional race car driver to ever capture the 12 Hours of Sebring, the Indianapolis 500, an open wheel title and the Rolex 24 At Daytona consecutively, accomplishing the feat in less than one year.  Mario Andretti and A.J. Foyt are the only others to win the four titles, but neither did so in succession.  By winning the 2012 Indianapolis 500, Franchitti became just the 10th driver in history to win the race three times, and ends his driving career as the winningest driver in U.S. open-wheel history from Great Britain.

FOR ALL MEDIA REQUESTS:  Franchitti will continue his recovery in Scotland for the foreseeable future and will accommodate media requests at the appropriate time.

Chip Ganassi has been a fixture in the auto racing industry for over 25 years and is considered one of the most successful as well as innovative owners the sport has anywhere in the world.  Today his teams include three in the IZOD IndyCar Series, two cars in the NASCAR Sprint Cup Series, and one Daytona Prototype in the GRAND-AM Rolex Sports Car Series.  Overall his teams have 17 championships and over 150 victories, including four Indianapolis 500s, a Daytona 500, a Brickyard 400 and five Rolex 24 At Daytonas.  Ganassi boasts state-of-the-art race shop facilities in Indianapolis and Brownsburg, Ind. and Concord, N.C., with a corporate office in Pittsburgh, Penn.