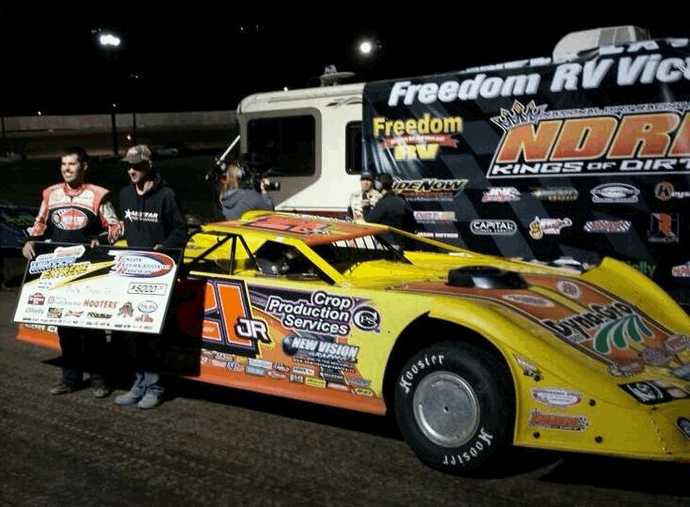 Tucson, Arizona (January 12, 2014) Billy Moyer, Jr. has had success in the past during early season Arizona events but it had been since 2011 that the Batesville, Arkansas driver had been to Victory Lane in the Copper State. Debuting a new Longhorn Chassis, Moyer showed early promise during Night One of Tucson International Raceway’s Winter Extreme presented by Tucson Harley-Davidson and RideNow Powersports-Tucson with an impressive heat race win. However Moyer fought handling issues and faded in the feature to an 11th place finish. On Sunday Moyer, Jr. erased any doubts that anyone might have had about his early success. Moyer grabbed another heat race win and then topped another outstanding field to claim the $5,000 winner’s purse and revive his confidence.

54 cars checked in for action in Keyser Manufacturing Qualifying for the second of six nights of racing. For the second time in as many nights, Williamson, West Virginia racer John Blankenship scored fast time honors by virtue of his 16.901 second time trial lap. And, just as the previous night, Blankenship proceeded to draw the maximum number for the heat race inversions.

Moyer took advantage of redrawing the inside pole position for the night’s feature and jumped out to an early lead. Behind him Missouri driver Terry Phillips worked his way to second, bypassing California’s Tony Toste. Phillips set after Moyer and stalked the leaded down by lap 4. One lap later a slip off of turn 2 by Moyer was all that the veteran Phillips needed to take over the lead. Phillips drove his Rocket Chassis deep into turn 3 and swept by Moyer. Phillips began to distance himself from the field stretching his to nearly half a straightaway by lap 10. But the night wasn’t meant to be for Phillips as he rolled to stop on lap 11 drawing the second yellow flag of the race.

Moyer resumed the lead for the restart and powered away from his pursuers until the yellow flag waved again when Tony Jackson, Jr. pulled up lame on the front straightaway. With the restart Moyer was once again able to drive away from Toste and a hard charging Jimmy Mars who started 6th. Moyer had held a significant lead until he began to reach lapped traffic. Moyer drew to the rear of Tucson’s Joey Moriarty but was unable to find a way to make a pass. This allowed Toste and Mars to close the gap Moyer had built. As Moyer saw the 5 to go indication Toste was all over him. Toste took a peak underneath the leader but couldn’t pull even. Toste continued to hound Moyer until the yellow flag appeared again when Ryan Gustin slowed with a trail of smoke at the start-finish line. “I was worried. I seen that caution come out, and I was like ‘whew’. That was a lifesaver.” Moyer said of the close quarters racing.

The yellow flag proved to be just what the 26 year old Moyer needed to guarantee the win, as he easily drove away on the restart to take the victory. Moyer was jubilant in the Freedom RV Victory Lane as he emerged from his Longhorn Chassis. “I’m really ecstatic. The car was really good. We missed it a little last night, but we got it back tonight. We had a little luck on our side, but hey, that’s part of racing.” When asked about how Phillips was able to get by Moyer was candid. “I made a mistake there and I knew it. Coming off of (turn) two, I buzzed my tires and my car drifted up the track, and I knew if somebody was on my tail, they were gone. I just followed him (Phillips) and thought maybe we’d get him back in lapped traffic. But he had some bad luck and we got it. But we’ve lost them that way too, so we’ll take this one. We definitely need it.” Moyer commented.

The NDRL competitors will now take off Monday and Tuesday but return to action again on Wednesday night at Tucson. For information on tickets for the remaining events please visit www.thendrl.com or call (864) 871-1442. You can also watch every lap from the comfort of your own home. DirtonDirt.com has all the action LIVE via PPV. For more information visit https://www.dirtondirt.com/liveEvents.php

Top four in each group inverted for heat race lineups

For more information on the National Dirt Racing League including a complete 2014 schedule point your web browsers over to www.thendrl.com You can also keep up with all the latest up-to-the-minute news by following the NDRL on Twitter at @The_NDRL and you can also find us on Facebook located at https://www.facebook.com/nationaldirtracingleague If you have further questions or needs you can also contact NDRL Series Director Kelley Carlton atkcarlton@thendrl.com or call (864) 871-1442.

The list of 2014 partners continues to grow, if you have questions or comments or if you are interested in becoming a sponsor of the NDRL contact Series Director Kelley Carlton at (864) 871-1442 /kcarlton@thendrl.com or NDRL Marketing Director Jason Babyak at (602) 647-0649 /jbabyak@thendrl.com.