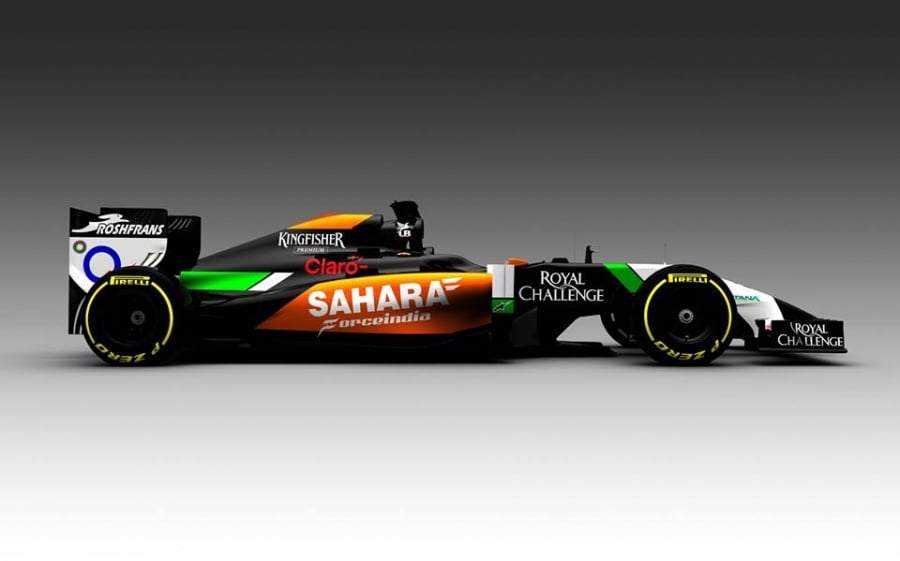 Sahara Force India revealed its dynamic new look today, offering fans and media a first impression of how the VJM07 will look when it is officially presented at next week’s Jerez test session.

The new livery brings a fresh trackside image for the team with the introduction of black alongside the traditional colours of saffron, white and green.

“The VJM07 looks stunning and the new livery reflects the way Sahara Force India is evolving,” says Vijay Mallya. “I’ve always believed our cars have been the most eye-catching, but adding black as a main colour gives us a fierce new look.”

Key to the new look is the introduction of several commercial partners. The logo of telecommunications brand, Claro, appears on the engine cover and signals the start of a multi-year deal with the famous Mexican brand.  There will be prominent Claro branding on the drivers’ suits and team kit.

The new livery also sees branding from Astana, a foundation that supports sporting initiatives by promoting the capital city of Kazakhstan. The Astana logo is positioned on the side of the VJM07’s nose.

“It’s been a busy winter for us on the technical and commercial front,” explains Vijay. “When I founded the team my first ambition was to launch the first Indian team on the grid, but the next stage in our evolution is to develop a global brand. I think that ambition is reflected in the partners we are working with and our world class driver line-up. It certainly feels as though there is the potential for 2014 to be our strongest season yet.”

As well as new colours, the changes beneath the skin of the VJM07 are even more extensive due to the new technical regulations. “The new rules have presented us with a huge challenge, but I’m very proud of the approach we have taken and the direction of the technical team,” says Vijay. “It will be fascinating to see how different teams have interpreted the rules and at this stage it’s impossible to predict who has done the best job.”

Technical Director, Andrew Green, is quick to emphasise just how different the VJM07 is compared to its predecessor: “Almost every single part is a new design, from the front wing right back to the diffuser. The genetics of the VJM07 still lie in the 2013 car, but we’ve had to achieve the same results in a slightly different way.”