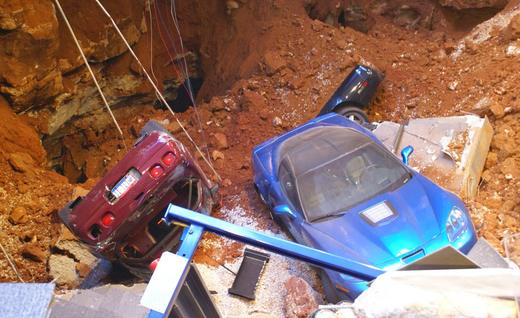 The news broke the eardrums of car enthusiasts worldwide. Now, the Corvette Sinkhole Video has surfaced directly from the National Corvette Museum.

This week a sinkhole destroyed eight classic Chevy Corvettes within the museum. Early, in the morning the floor disappeared from under the classic cars creating a true money pit.

The gapping hole then swallowed $1-2 Million dollars in automobiles. Half of you reading this were just sent to a far darker place than I would ever send you while writing a story about the Corvette Sinkhole Video below. At this time I’d like to kindly ask you bring your minds back out of the gutter for just a second, slowly walk back into the light and bare with me for just a few more seconds.

As we continue, the value numbers are actually far less than originally reported by major news outlets but that’s the way of the world. Hagerty Insurance which specializes in classic car insurance reported this is what the value of the cars really are. Most of which not running into the rare department.

Of the cars now covered in soil are the 1 millionth Chevrolet Corvette ever made. The 1992 Corvette Convertible with an estimated value of close to $1 Million. The car really isn’t priced that high because of it’s features but strickly because it’s the one millionth Corvette produced. Hagerty suspects it would draw in the high six figures at an auction.

Adding to the numbers the 1.5 Millionth GM Corvette also sits below the museum. This car wouldn’t draw near the value of the 1 Millionth but still its not cheap.

Another of the sunken Corvettes is a 1962 Corvette which is pictured below. Of all the cars in the unfortunate natural sinkhole disaster this one is maybe the least damaged and definitely salvageable. A 1993 Corvette ZR-1 Spyder Prototype is rare. Only a few of these were ever made and it was never officially produced. Add that the ZR-1 Spyder is extremely desirable and this car is worth somewhere in the $250,000 range.

Getting these cars seen in the Corvette Sinkhole video below back to the earth’s surface will be no easy task, not to mention doing so without causing more damage to the Corvette’s. Plans have been made to cut a hole in the roof and drop a crane in, pulling the cars back up 30 feet to the ground and another 100 feet through the roof.

One of the National Corvette Museum directors has said sinkholes are common in the area. He said no warning was given of the coming disaster but everyone was thankful it happened during the closing hours. He added that technology now exists to build on top of sinkholes and that the museum will likely remain in Bowling Green, KY.