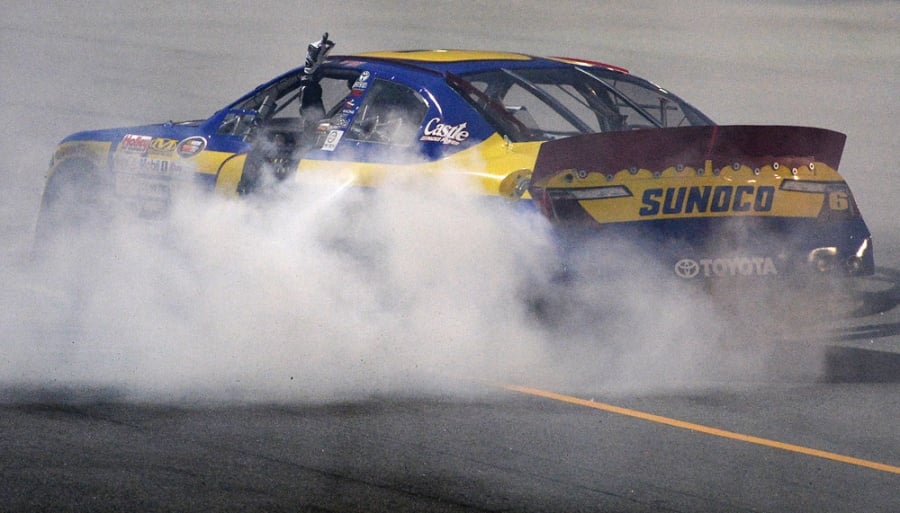 DAYTONA BEACH, Fla. — Daniel Suarez made it 2-for-2 in the young NASCAR K&N Pro Series East season, taking charge early on Tuesday night and cruising to victory in the UNOH Battle at the Beach at Daytona International Speedway.

Earlier in the night, Doug Coby clinched the NASCAR Whelen Modified Tour portion of the second annual showcase for the short-track stars of NASCAR’s touring series. Both winners had to withstand late-race restarts, but avoided the mayhem that foiled the last-lap leader in each race during the 2013 running.

Daniel Suarez — a NASCAR Drive for Diversity standout and NASCAR Next developmental driver from Monterrey, Mexico — started sixth and methodically picked his way to the front, snagging the lead by the 32nd of 150 laps. From there, he dominated, leading 119 laps and charging to his third career victory in the series.

“Man, I feel like I have no words for where I am right now,” the 22-year-old Suarez said. “I feel like it’s a dream.” says Daniel Suarez.

Daniel Suarez edged Cameron Hayley, last year’s UNOH Battle at the Beach winner in the K&N Series, in a door-to-door contest at the checkered flag just two nights earlier in the season opener at New Smyrna Speedway. Tuesday night, he staved off any potential pressure to win by a relatively comfortable margin of .596 seconds.

The second edition of the Battle at the Beach wasn’t without fender banging, with eight caution periods slowing each race, but changes to the course prevented a repeat of the crash fest that erupted in the inaugural event. Race officials shortened the straightaways of the temporary course on the backstretch of the 2.5-mile speedway and rounded the apexes of the turns to curb the banzai-style passes that marred the inaugural event.

The alterations didn’t stop the Modified race, the night’s opener, from a frantic finish with plenty of late contact on the revamped .37-mile layout. Coby slipped by race-long dominator Ryan Preece on a late-race restart with three laps left, then withstood a significant last-lap bump from Jason Myers to prevail.

Coby, the 2012 series champion, was running third for the final restart and neatly slipped through the closing melee in the non-points event, taking advantage of damage to Preece’s car. It marked a repeat victory in the Daytona exhibition for teamowner Mike Smeriglio III, who fielded a winning car for Steve Park last year.

Myers held on from the last-lap contact to finish second, .322 seconds behind. Luke Fleming — like Myers, a competitor on the NASCAR Whelen Southern Modified Tour — held on for third place with Preece fourth and Burt Myers, the runner-up’s brother, fifth.

For Preece, a NASCAR Next driver and the 2013 champion of the northern-based Modified tour, the result was heartbreaking. The 23-year-old Connecticut native led the first 147 of 150 laps but made contact trying to put Dave Sapienza’s No. 36 a lap down.

Sapienza spun to bring out the eighth and final caution period. Preece continued, but with a bent left-rear wheel that left him vulnerable for the decisive restart.