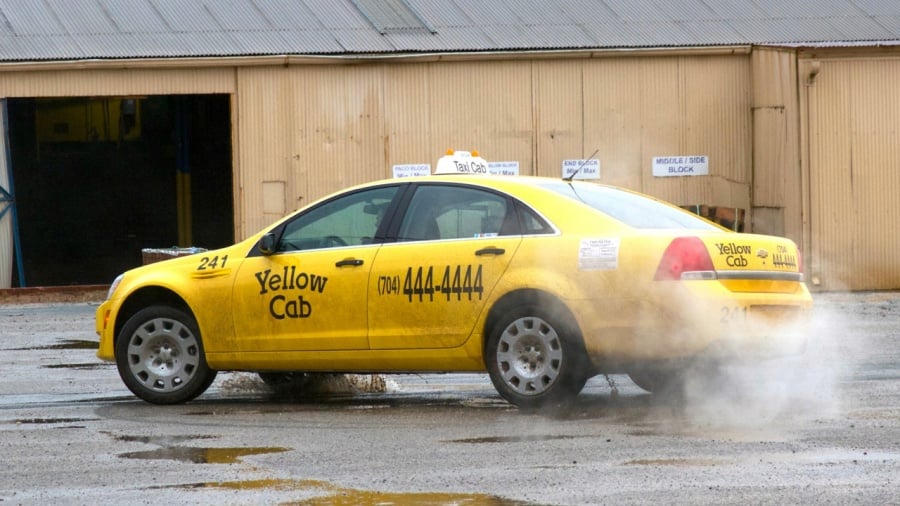 I keep to myself in cabs until the Jeff Gordon Test Drive 2 guys come along. But one thing that gets my attention is a driver with a neck tattoo telling me that he just got out of jail after 10 years and that the cop behind is making him nervous. And especially when he starts a police chase while yelling “I can’t go back.” I thought this was the end.

Nope. This is how NASCAR champ Jeff Gordon gets revenge. Via the Test Drive 2 video below.

I had a conversation with the boss, Matt Hardigree, in mid-January. An opportunity had come up. A chance to get in the brand new Corvette Z06 (aka ‘Big Nasty’) before anyone else, even most people at GM, had gotten a chance. I thought it was a bit odd because I knew development work on the Z06 had just started, but the marketing side of the car business is far different than the PR side. Maybe they had a preproduction show car filming an ad early, it happens. We get a lot of interesting opportunities, so this was the sort of thing where I didn’t ask any questions and just said I’d do it.

So I flew to Charlotte where I was told that the Z06 was being filmed for an ad series that would happen before Top Gear USA. Ray Wert, former EIC of Jalopnik and current tall-man about town, was working on the ad and was setting up the drive. I was told that if anybody found out what I was doing, including the hosts of Top Gear, he could stand to lose a substantial sum of money. So I kept it totally quiet and only told my parents exactly what I was doing. My coworkers knew I was going away, but Matt and I agreed we wouldn’t tell them what it was for.

Ray picked me up at the airport and took me to the hotel in the middle of nowhere, nearish to Rockingham Speedway, where he was filming. We talked about the car and how excited we were to get some time with it. Early the next morning he heads to the track, leaving me alone in possibly the worst Quality Inn on the east coast. I start writing some posts for the day. Then Ray calls.

We were accidentally booked into the wrong hotel by a production assistant, which is why we didn’t see the crew or vehicles. We were supposed to stay in a different Quality Inn that we had passed a few miles away. Ok, whatever. He picked me up and brought me to the other one where I sat and worked. All day. I was told a car would come get me at 1:30 that day to take me to the track and the Z06. But we got delayed. Until four. I started thinking I wasn’t going to get in the Z06 at all. I was getting annoyed. And because I didn’t have a car, I hadn’t gotten anything to eat since breakfast.

I get the call that the cab is outside, so I go out the back door of the hotel and approach it from behind. That’s when I noticed it was a Chevy Caprice, a new one that is only for municipal use. I thought it was odd but figured it came from a police auction or something. Maybe they just have Caprice cabs in Charlotte. I honestly didn’t really care. I get in, the cabbie asks if I’m Travis, which I am, and then I just start looking at my phone and tweeting stupid things.

I live in New York, that’s what I do in every cab.

We make some small talk about what I’m doing in Charlotte, where I’m from, how the area has changed, but it’s mostly silence because I can’t hear much through the small window opening.

Then he says something a bit alarming that I definitely did hear. “There’s a cop behind me. I get nervous when cops are on me. I just got out after 10 years in jail.”

These aren’t things that you think the passenger would normally be told. I didn’t ask what he went in for, but a safe assumption is that if it was 10 years it wasn’t for littering. The cop turns on his lights to pull us over. I assumed we had been speeding and the driver didn’t realize because the speedometer didn’t work in the cab (Someone who drove me to the airport when I was younger would unhook the speedo so the miles wouldn’t run up, that way his cars would have a higher resale value. This made me think it was a semi-common practice, so a non-working speedo didn’t stand out as weird).

All the while, the car is in neutral, the driver’s hand near the shifter. And then, suddenly, we take off. Fast. This is when I start screaming and the driver says he’s “sorry.”

I’m a bad passenger in a car, I always have been, but this is slightly different. See, I was just kidnapped by an ex-con in the back of a cab that is now speeding down a hill, busting through a chain fence and narrowly missing buildings while trying to get away from a North Carolina State Trooper. I thought I was going to die. I yelled, I banged the glass, I actually tried to kick through the plexiglass window between the driver and me. I pulled out my phone to call 911, but couldn’t keep it steady enough to dial.

As far as I’m concerned, I had a license to majorly freak out.

What was I planning on accomplishing? Not dying? Taking him down with me? Strangling him? I don’t know. I just had to do something.P

What I do know is that I was incredibly polite to the man with my life in his hands. I always called him “sir” and said “please” a lot. I guess I did that because if you show someone respect, maybe they won’t shoot you in the face later that day when you’re tied up in his meth lab and he’s planning on how to get rid of all the evidence.

I tried reasoning with him. I’ve watched Cops and every show Sheriff Jon Bunnell has been on. I know running from the cops never works. I told him that, to which he replied “it has to” and “it’ll all be over soon.” I said how I didn’t do anything wrong. That didn’t seem to matter to him. I also saw the cop facing us at one point, so I ducked because maybe they’d shoot at him.

I don’t know, I’ve never been in a police chase before.

We’re on mud in an industrial brickyard, dodging buildings and hitting barrels. At one point water and mud goes all over the windshield and we can’t see where we’re going. We don’t hit the workers that are milling about, but we’re going fast.

After what feels like forever (it was actually about 60 seconds) we do a couple donuts, I thought maybe he was going to let me out or was trying to make tire smoke to obfuscate his car. But then we pull into this garage at full speed and lock up the brakes. A garage full of Pepsi. And cameras. The driver runs around and the first thing he says is “I got you back! I’m Jeff Gordon.”

It all added up pretty quickly after that. Last year, Jeff Gordon and Pepsi did an ad called Test Drive, where a disguised Jeff Gordon took an unsuspecting salesman on a wild ride in a Chevrolet Camaro. It was a fantastic ad.

The problem is that everything in it was fake. Jeff wasn’t driving the car, stunt driver Brad Noffsinger was. The car was the wrong model year. Every person in the ad was actually an actor. We were the first website to call it out and dissect everything. I did a few interviews on TV and wrote three stories about how Pepsi and Gordon duped the public. That pissed Jeff off and he wanted to do it again. Bigger. Better. He wanted to get me back.

And the way they decided to do that was in a mock police chase where I thought I was going to die. Looking back on it now, I’m not sure how I didn’t guess beforehand, but it boils down to the fact that I had no reason to believe anything was off.

I didn’t question driving the Z06 so early because it’s the sort of opportunity you just take no matter how it’s offered to you. I didn’t get in the cab imagining that Jeff Gordon is going to pick me up to prank me back for a small amount of investigative reporting that I did a year ago because why would I? You’d think that a felon wouldn’t mention he was in prison for 10 years, but who knows? I’ve never been in a car with a felon before. During a police chase with said felon you don’t first think “oh, this is a prank and I’ll be fine.” P

No. It was a normal day for me that turned into what I thought was going to be my last.

This day ended far better than I thought it would when I was in that cab, but it did leave me with two lasting issues. First, I didn’t drive the Z06 (though Jeff has said he’s going to make some calls to get me in a car). Second, if I’m ever really kidnapped, I’ll just think it’s Pepsi and Jeff Gordon pranking me.

That could be a real problem.

(FULL DISCLOSURE: Jalopnik paid to fly Travis to Charlotte and for all of the trip. Travis also isn’t getting paid for being in what is, ultimately, an advertisement. After calling out Jeff Gordon last year I agreed to give him a chance to get Travis back. I had no idea it was going to be a police chase and I’m glad Travis doesn’t hate me. — Matt)