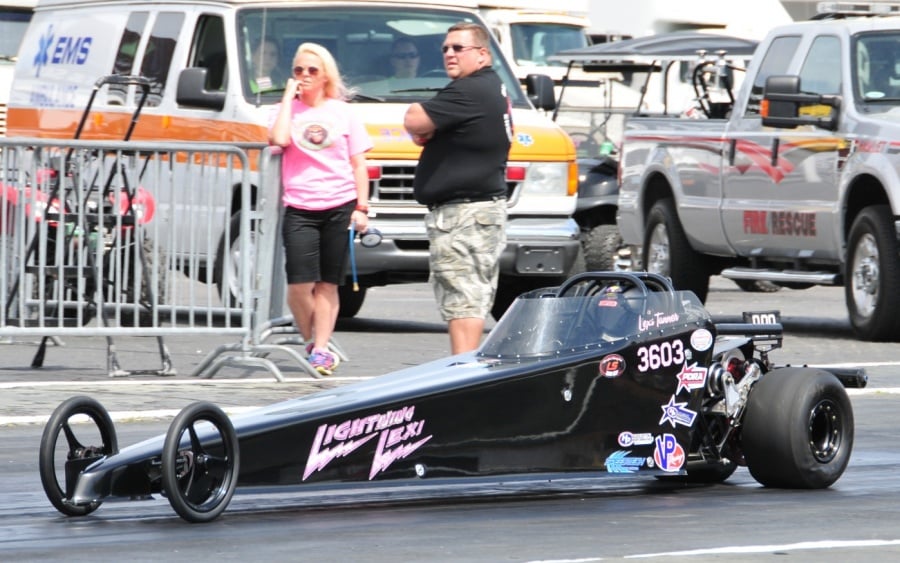 PITTSBORO, N.C. April 11, 2014: The founding race for the Professional Drag Racers Association was a memorable one for all in attendance. A great field of cars, packed stands, record-breaking runs and a well-run weekend made the Spring Open a practically perfect maiden voyage for the PDRA. When all was said and done, fans, racers and all in attendance raved over the event. However, perhaps no one enjoyed the weekend more than one 12 year old boy and 11 year old girl.

Connor Caulder of St. Pauls, NC and Rennselaer, IN’s Alexis Tanner are no strangers to the winner’s circle. Each have racked up a slew of trophies in their respective Junior Dragster categories. But both Connor and Alexis will quickly tell you that winning the first-ever PDRA event was an especially memorable victory.

Connor Caulder, a sixth grader during the week, qualified his Huddleston Motorsports / Clinic Pharmacy backed dragster fifth in the Pro Junior Dragster field of 31. He  took out fellow North Carolinian Brittany Dial in round one. Then in round two against Abby Hacker, Connor showed that he had everything that was needed to win as he put together a .015 package, running 7.900 on his 7.90 dial with an. 015 reaction time.

He continued through eliminations, taking out Alexis Schultz and Ryan Tolloy to meet Rebekah Evans in the final. Connor, despite winning the IHRA Division 9 Championship, Summit Super Series Championship and Fayetteville Motorsports Track Championship all in 2012, admitted to nerves before the final round against Evans. No one would have been the non the wiser though, as he skillfully drove his machine to the first-ever PDRA Pro Junior Dragster win.

“The dragster was running very well. We had a pop in qualifying but Huddleston Motorsports helped us fix it,” said Connor, whose team consists of parents James and Lori Caulder. He also boasts proudly that his well-earned PDRA trophy sits “in the kitchen, where everybody can see it.”

“I would like to dedicate this win to Alvin Brewer,” added Connor Caulder. Brewer, father of Connor’s friends and fellow racers, Chad and Troy, and a mentor to Connor, passed away in late 2013.

Alexis Tanner also qualified fifth in her category of Top Junior Dragster. She utilized consistent reaction times to take out Holt Strickland, Blake Denton and Amber Franklin to meet Thomas Oates in the final. Having been behind the wheel since she was eight years old, Alexis Tanner has collected a number of trophies in her young career. The PDRA victory would be her first, however, on a national level. Rest assured, it won’t be her last.

Fifth grader Alexis Tanner also enjoys tumbling, but says she likes drag racing for “the way it makes you feel when you go fast.” Junior Dragsters can reach speeds of up to 85 MPH. Alexis Tanner has been as fast as 77 MPH, covering the eighth mile in 8.75 seconds.

Alexis Tanner races alongside her brother, Preston, with dad, Andy, assuming the role of Crew Chief. Her mother, Missy, rounds out the crew to make it a full family affair. “I want to thank my dad for crew chiefing me and and driving me all the way to North Carolina, and the PDRA for creating the race and letting the juniors run in it.”

Both Connor Caulder and Alexis Tanner plan on running the full PDRA tour, so be sure to stop by their pits and say hello at the PDRA Georgia Drags at South Georgia Motorsports Park, May 9-10.