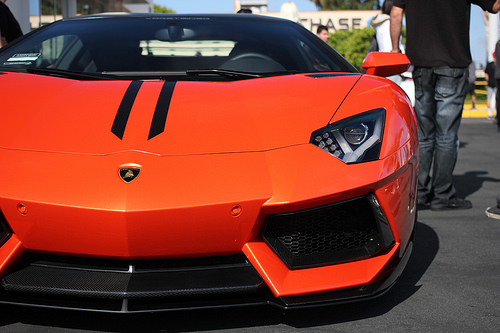 Every month, Lamborghini Newport Beach hosts a Supercar Show on the first Saturday of the month. The events start sat 9:00AM at our showroom facility located at 1425 Baker Street in Costa Mesa CA.

April is here and the weather is definitely Spring-like.  Recently we’ve had some bad luck with the weather but on April 5th, the weather couldn’t have been any better for our Supercar Show.  A very light breeze with the warm California sun enticed all the supercar owners to bring their prized weekend-warriors out for a breath of fresh air.  And boy did the supercars come out in full force this weekend!

If you joined us this past Saturday, then you know the type and amount of very special supercars that were in attendance.  Undoubtedly, the Game-Changing “Azure Blue” McLaren P1 was the center of attention with a pair of Ferrari F40’s also catching onlookers in disbelief as many did double-takes to insure they were in fact witnessing 2 F40’s within 30 feet of each other.  Regardless of your preferred marque of supercars, every manufacturer was well represented.

If you love Lamborghini, then the supercar show scenery of Aventador’s, Murcielago’s, Gallardo’s, and even Diablo’s would satisfy your quench.  Should you prefer Ferrari, a very special 458 Speciale, F430’s, F430 Scuderia, 360 Modena’s, and a 599 would leave you feeling much happier.

McLaren enthusiasts would be happy to find here the P1 at the supercar show  supported by the new 650S Spider and a handful of 12C’s.  The McLaren’s weren’t the only British to join the fun as an Aston Martin and Rolls Royce Wraith were proudly displayed.

Not into British supercars?  No need to worry, the German marques Porsche, Mercedes & Audi all had very respectable representatives at the supercar show such as a Carrera GT, 997, R8’s, and an SLS showing off their German pride.

An American supercar and Japanese supercar were also in attendance in the form of a Ford GT and Nissan R33 Skyline GT-R.  Both extremely fine examples showing that you don’t have to be european-blooded to be a proper supercar.

We would like to take this opportunity to thank all the supercar enthusiasts and supercar owners for joining us at our dealership for our Supercar Show.  We’ll see you back here in a month for the next round!

The goal of our event is to provide an atmosphere where exotic car owners can congregate and showcase their vehicles. Lamborghini Newport Beach provides coffee, muffins, and other assorted snacks and beverages to help get your Saturday started.

Lamborghini Newport Beach is extremely proud to be the only Lamborghini factory authorized dealer for Orange County!