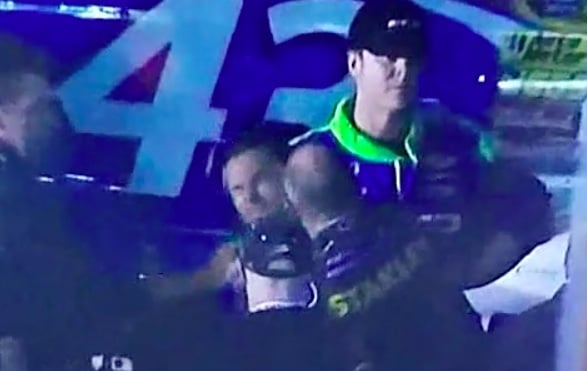 Watch the Marcos Ambrose vs Casey Mears Fight Video Below

The Marcos Ambrose vs Casey Mears FightVideo shows Ambrose and Mears having an animated discussion outside the line-up of team haulers in the garage. After talking to one another, Mears seems to grab Ambrose from the back and push him away when the Australian stops and throws a punch that hits Mears in the face.

In the video – obviously shot from a distance — Mears appears to put his hand on his left eye and move toward Ambrose before crew members from another team stepped in, separated the two and pulled Ambrose away into a large group of crew members when it also looks as if someone in the crowd throws a punch at Ambrose.

Mears did make a brief comment on Twitter about the race on Saturday night. Then on sunday said “He got me good”

NASCAR Vice President of Competition Robin Pemberton told reporters later that upon initial review the incident didn’t look like it “was anything too severe.’” He said he hadn’t spoken with either of the drivers about it yet.

“We’re just taking a look at it. …  looking at the video and it doesn’t seem to be much, but we’ll take our time Monday and Tuesday and look at it some more,” Pemberton said.

“We’ll get all the footage we can and look at it and see what happens from there.

“There might be more to it than that (a punch) so we have to take our time and look at everything.

“Sometimes there’s things out there for us to look at that we don’t have available right now, so to make any statement or call on it right now would be a waste of everybody’s time.

“It was good hard racing tonight and probably some of the best racing we’ve seen at Richmond. A lot went into it, a lot of good lead changes and people were being aggressive and that’s what people like to see, good hard racing.”