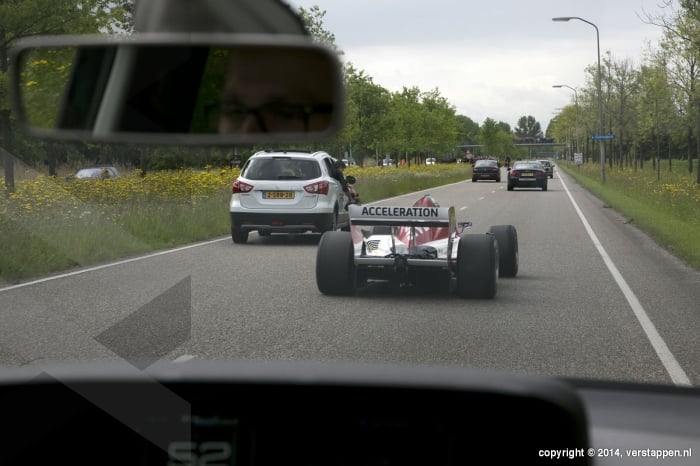 F1 Car On Highway Videos Below

Jos Verstappen raced a F1 car on the highway Wednesday, all the way through Lelystad. Well, it’s not a true F1 car but an FA1 car is close enough and in this case who’s counting anyway. Regardless, we are all endlessly entertained by the video and photos posted below.

The video went viral overnight and it’s continuing to pick up steam today. You haven’t seen the videos? Join the rest of us below and enjoy.

The entire motorsports community would love to give props to Jos Verstappen and crew along with whoever came up with the brilliant idea. Not just came up with the idea, but actually made it happen, legally. We think. One of the photos below does feature a police officer writing what appears to be a ticket. However, that my be all for show.

“From the airport via the Oostrand Drove towards the center, where the Town Hall a smokescreen was deposited by Batavia City. Along came the former Formula 1 driver the necessary obstacles in the form of traffic, and traffic police.” A quote translated to english from the dutch driver website. The source of the visual orgasms below.

Here are some spectacular videos of promotional stunt for Autoweek Live, all posted below.

Do not forget to scroll down just a little futher. You’ll also want to give the F1 Car On Highway photo album of Jos by Lelystad a look.

Beyond the videos of the F1 car on highway you’ll also notice the last video is interesting as well. While it’s not like the other videos. The American F1 fans reading this, most of you (us) also fancy NASCAR and dirt oval racing. Well, in this last video I’m speaking of youll see the F1 car and a high banked oval, an exciting thing to see.