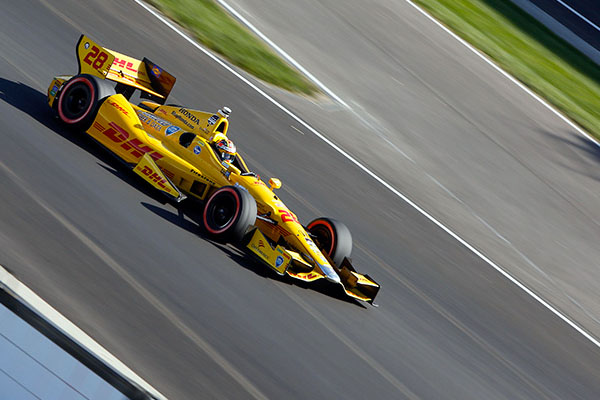 Leading the 2014 Indy 500 Results sheet is Ryan Hunter-Reay who was denied a shot at a final-lap victory in the 2013 Indianapolis 500 Mile Race because of a yellow flag for a single-car incident in Turn 1. Third place was a career high in “The Greatest Spectacle in Racing,” but the Fort Lauderdale, Fla., resident felt cheated.

A similar situation materialized in the 98th edition, and this time Hunter-Reay was the one drinking the milk in Victory Circle.

Hunter-Reay, driving the No. 28 DHL car for Andretti Autosport, held off three-time Indy 500 winner Helio Castroneves by a hair-raising .0600 of a second — the second-closest margin of victory in the event — in a six-lap shootout to claim his first Indy 500 victory. Marco Andretti finished .3171 of a second back for his third third-place finish in nine starts.

There were 32 lead changes among 11 drivers.

Carlos Munoz, who finished second last year as a rookie, finished fourth and 2000 Indy 500 winner Juan Pablo Montoya was fifth. Kurt Busch, who had 600 more miles of racing left on the day in North Carolina, placed sixth in his first 500 Mile Race.

Race officials red-flagged the race on Lap 192 for seven minutes to fix the Turn 2 SAFER Barrier and clean up from the single-car incident involving Townsend Bell’s No. 6 Robert Graham KV Racing Technology entry. Bell had been running fifth — 1.8 seconds behind Hunter-Reay.

The first caution flag flew on Lap 150 when the No. 83 car driven by Charlie Kimball made light contact with the SAFER Barrier in Turn 2. The record to start the race had been 65 laps in 2000. The four yellow flags tied the record for fewest (1990); the Speedway started recording cautions in 1976.

Graham Rahal was the first to retire from the race with an electrical issue in the No. 15 entry. Tony Kanaan, who won the race in 2013, developed an early suspension issue and finished 28th.

ABC will televise both rounds of the Chevrolet Detroit Bell Isle Grand Prix on May 31 and June 1 — both races at 3:30 p.m. (ET).

INDYCAR Drivers Fan Out Across 21 States for INDY 500 Promotion