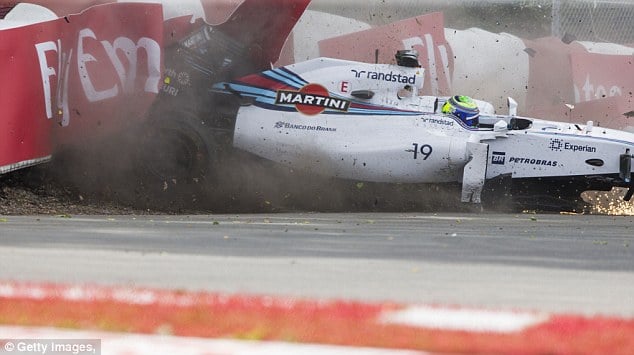 There was a huge Felipe Massa Sergio Perez crash that ended the Canadian Grand Prix this weekend. Watch the video below. The crash forced an early end to the race as Daniel Ricciardo went on to his first win.

Both drivers were not injured. Felipe Massa was taken to the hospital following the crash. However, he was quickly cleared. A good sign as massa has had his run in with a similar looking crash years ago. A crash that took him out of his Ferrari for several months.

Shortly after the crash fans naturally took to twitter placing blame on their chosen driver. Force India F1 Team, who fields the Sergio Perez machine has since responded. They have placed blame on Felipe Massa the Williams F1 Team driver.

“They say a picture is worth a thousand words… who crashes into whom?” was the first tweet about the incident from the Force India twitter account.

The team of Sergio Perez didn’t stop there as they then tweeted “We’re not used to air our grievances publicly. But when others do and accuse us of playing with others’ safety, we are compelled to reply.”

Even driver Sergio Perez has voiced his opinion. “I watched several replays of the incident and I can’t help but notice how Felipe turns right just before he hits me” says @SChecoPerez. He continued, “I was following the same line and braking patterns as in the previous laps and I just got hit from behind by Massa. There was plenty of space on the left of my car to attempt a clean overtake and I cannot understand why he had to scrape by.”

On the other hand Felipe Massa has also taken to twitter. He’s posted photos blaming Sergio Perez. See the timeline photo below, posted by Massa.

At the end of the day it was close, exciting racing and things happen.

You can see all the photos posted and the video of the crash below.