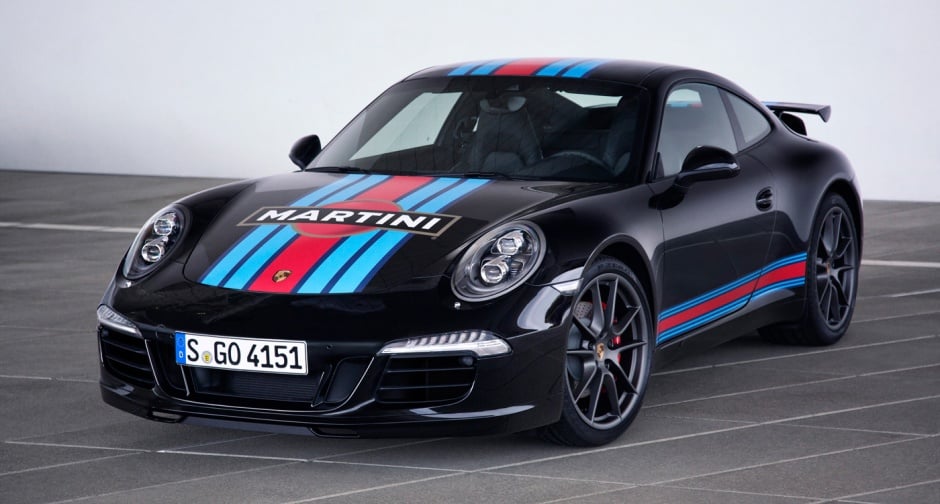 Porsche has rolled out the Martini Porsche 911 see the photos below. Only 80 of these car will be available for purchase.

Porsche is returning to race at Le Mans this weekend. They’ve been pretty good at the 24-hour endurance thing in the past, with 16 outright victories since the 1970s putting Stuttgart at the top of manufacturer leaderboard.

In celebration, Porsche has rolled out 80 models of its 911 Carrera S decked out in the legendary ‘Martini’ livery. This is the Martini Porsche 911 and it’s lovely.

As you can clearly see, there’s a very large blue/red Martini stripe across the top and sides, two body colours (black or white), dashboard accents, a special front apron with an ‘optimised’ spoiler lip and fixed rear spoiler.

After a 16-year hiatus, Porsche is back at Le Mans and they decided to best way to spread the word would be through a special Martini Porsche 911 Racing Edition of the 911 S. It can be had only with either a white or black body paint matched with Martini’s traditional blue-red color scheme on the roof, rear wing, boot lid and sides. Moreover, the model can also be visually distinguished by its Aerokit Cup front apron and fixed rear spoiler.

Power to the Martini Porsche 911 comes from the familiar flat-six 3.8-liter engine outputting 400 PS (294 kW) sent to the wheels through a PDK gearbox. This hardware arrangement allows the limited-run 911 S hit 62 mph (100 km/h) in 4.1 seconds when the Sport Plus button is activated.

Sales of the 911 S Martini Racing Edition will commence this month in Europe, followed later this year by China, Japan and Latin America. Porsche has announced production will be capped at only 80 units.