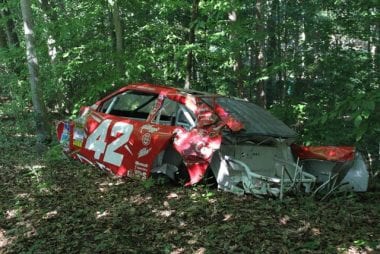 Of the NASCAR cars in the woods the most famous might be a car from Juan Pablo Montoya. Where is the Juan Pablo Montoya jet dryer car now? You guessed it. It sits in the Dale Earnhardt Jr race car graveyard behind his home in North Carolina.

The majority of the NASCAR race cars come from JR Motorsports and Hendrick Motorsports. However, you’ll notice cars from all 3 steps of the top tier NASCAR ladder including a truck series machine. 12 of the graveyard cars were from Brad Keselowski while racing JR Motorsports cars.

It looks like a new car will be added to the collection following the NASCAR road course event.

Where do NASCAR racecars go to die? Take a look at the photos from the Dale Jr Race Car Graveyard below including an aerial photo. The aerial photo shows race cars scattered all throughout the woods.