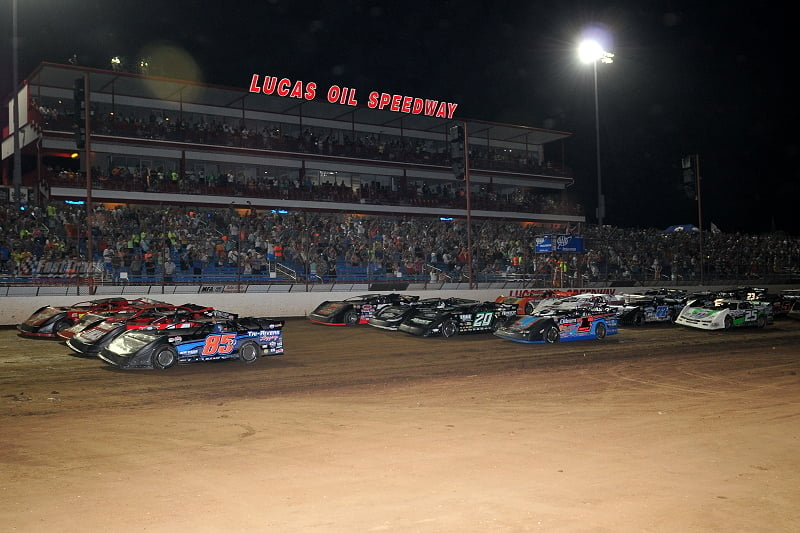 Both Owens and Bloomquist entered the Diamond Nationals at Lucas Oil Speedway with 49 wins, each, in series history. Owens initially took the lead on lap three from Earl Pearson, Jr. and then had to fight off the challenges of Bloomquist. Owens and Bloomquist ran side-by-side for a handful of laps in heavy traffic. Bloomquist led for four laps until Owens pulled ahead for good on lap 19. The race saw only one caution flag and that was for a multi-car accident four laps into the race.

Jesse Stovall charged from the 16th starting spot in the Diamond Nationals to finish fourth. He survived a torrid battle with Don O’Neal, who entered the event as the LOLMDS points leader and finished fifth.

“Man, I don’t know what to say. The car was super good all night. It’s great to win here in front of my car owner and this tremendous crowd. The track was probably the best I have ever seen it from start to finish. We could run anywhere on it. I don’t know what it is about this place, but for some reason we can get around here pretty good”, stated Jimmy Owens in victory lane.

“I got by Earl early on, and then we had that one caution. Then I got into some big-time traffic and Scott caught me. We had a heck of a race for a while. Everybody out there was giving everybody plenty of room to maneuver. Once we got back in front, I was hoping the race would stay green and it did. That’s just a testament to the drivers that raced tonight and the track conditions. I have to thank Reece Monument Company, Edge Services, Ohlins, Sunoco, Red Line Oil, FORD, and Keyser. It was a great win for us”, Owens concluded. With his sixth series victory of 2014, Owens moved ahead of O’Neal in the series championship point standings by just five points heading into Tuesday’s event at Lakeside Speedway in Kansas.

Bloomquist recorded yet another second – place finish, but could not keep pace with Owens over the last half of the Diamond Nationals race. “He [Owens] was really good tonight; I kind of made some adjustments on the car that didn’t turn out liked I had hoped. The car has been solid no doubt. The track was just outstanding to race on tonight. Everyone could race from the bottom to the top. We needed to be a little freer with the car. But man one spot again, that’s all we need. We have a few days off to regroup before we head to Lakeside, so we will hope for better results then. I have to thank Ole Smoky Moonshine, Penske Shocks, Andy Durham Race Engines, and Randy Sweet.”

Pearson led the first two circuits, and then managed to stay in the top three for the rest of the Diamond Nationals race, coming home third behind Owens and Bloomquist. “What a great crowd tonight! Having Forrest Lucas was here tonight was a real honor. The track was just was superb tonight. Gary Hubert and his crew are really doing a great job with the track prep. We were good early on and could stay up there with those two, but I went to the top and got faster, but I had lost so much ground to them, I wasn’t going to able to catch them without a caution flag. I have to thank Bobby Labonte, Lucas Oil Products, MAVTV American Real, Sunoco and everyone else on the team.”