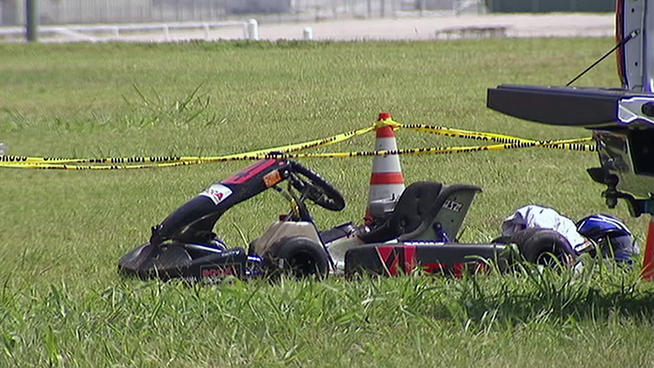 Kierstin Eaddy entered the Texas Motor Speedway pits at speed higher than normal after leaving the go kart track. Kierstin Eaddy then lost control and drove into a wire. That wire pulled her helmet off as the kart came to a stop in the speedway grass.

It all went wrong after she crossed the finish line. Spectators told police it looked like the throttle stuck on the machine and she had no way of slowing down. The go-kart solo race was over and Kierstin Eaddy lost control of her kart entering pit lane.

Speaking from years of go kart experience. It’s also very possible she just ran out of brakes. Go kart fluid is known to boil. If the brake fluid boiled then the brake pedal would go to the floor, failing completely. It could have also been something as simple as the brake bleeder screw popping loose. A long list of mechanical issues could have caused it at no fault to Kierstin Eaddy and racing team.

A loss of brakes would give spectators the appearance of a stuck throttle. It was also discussed by officials that 14 year old Kierstin Eaddy could have also lost consciousness as she entered the pit lane. So many possible answers, we may never know why it happened but it really doesn’t matter. The sport of karting lost one of our young drivers and we mourn.

It was reported Kierstin Eaddy left the karting track alive in an ambulance helicopter. She was flown to the hospital but was later pronounced dead. A tragic loss for the entire racing community.

The family of Kierstin Eaddy say the Flower Mound resident was an honor student and a volunteer and are “trying to understand why God took such a special little girl today.”

The tragedy has now been heard by every racing fan and driver. The motorsports community has flooded the family with support.

“All of us at the SCCA are shocked and saddened to hear about Sunday’s tragic accident involving Kierstin Eaddy. We are a Club of families, and are shaken by the loss of this young competitor. Personally, and on behalf of the SCCA, my heartfelt condolences go out to Kierstin’s family, friends, and the participants at Sunday’s event.”