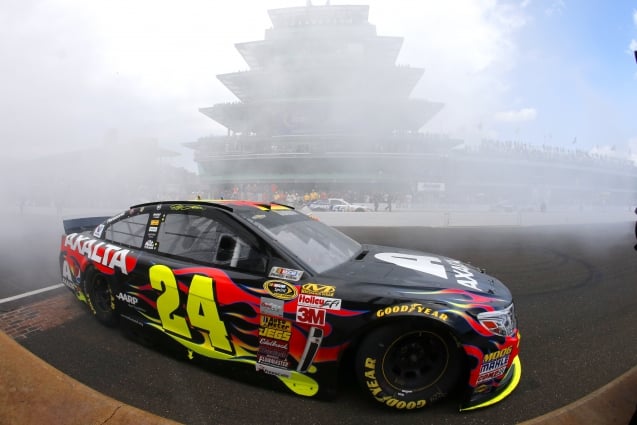 Jeff Gordon led the NASCAR Brickyard 400 results sheet following today’s event at Indianapolis Motor Speedway. On what the Indianapolis mayor declared Jeff Gordon Day, the driver of the No. 24 Axalta Chevrolet SS made some history.

Thanks to a strong restart with 17 laps to go, Gordon took home his fifth Brickyard 400 win. He became just the second driver ever to win five times in a major race at Indianapolis Motor Speedway, joining Formula 1’s Michael Schumacher.

“Let’s go kiss those bricks!” Gordon exclaimed on the radio as he took the checkered flag.

Next of the Hendrick Motorsports drivers was Kasey Kahne, who led the most laps on the day but fell behind on the final restart and finished in sixth place.

Dale Earnhardt Jr. was next in ninth place, followed by Jimmie Johnson in 14th.

KASEY KAHNE, NO. 5 TIME WARNER CABLE CHEVROLET SS
FINISHED:
6th
STANDINGS: 15th
RECAP: After starting the race in 10th position, Kahne wasted little time jumping toward the front of the pack. After the competition caution on lap 20, Kahne was second in the race off of pit road and moved into second place in the race when the green flag waved for the restart. He took the lead for the first time on lap 32 and proceeded to lead the most laps of anyone in the field for the afternoon. After a caution on lap 67, Kahne quickly took the lead on the restart and led the Brickyard 400 at the midway point. A competitor stayed out during a yellow-flag pit stop on lap 96 to take the lead from Kahne, but Kahne won the race off of pit road and another strong restart put him back in the lead on lap 101. He took his final green-flag pit stop on lap 127 and took fuel, four tires and a chassis adjustment and a caution flag at lap 138 helped Kahne save fuel for the finish. The restart after the caution however left Kahne in fifth place with 17 laps to go, and he finished in sixth position.

JEFF GORDON, NO. 24 AXALTA CHEVROLET SS
FINISHED:
1st
STANDINGS: 1st
RECAP: Gordon started the race in second place but quickly took the lead, which he held all the way to a competition caution on lap 20. He has now led laps in 14 of the 21 Brickyard 400s—the most of any driver. On the restart after the caution, Gordon told crew chief Alan Gustafson that he had a “real bad wheel spin there” and fell out of the lead. He stayed near the front of the pack even as teams cycled through green-flag pit stops and retook the lead on lap 65 before taking his second green-flag pit stop. At that point, he had led the most laps of anyone on the track, though his Hendrick Motorsports teammate in the No. 5 Time Warner Cable Chevrolet SS would take that title by the end of the day. Gordon stayed in or around the top five for the rest of the day, moving up to second place on lap 113. On a restart following a lap-138 caution, Gordon retook the lead from Kahne with 17 laps to go and held on the rest of the way for his fifth Brickyard 400 victory.

JIMMIE JOHNSON, NO. 48 LOWE’S/KOBALT TOOLS CHEVROLET SS
FINISHED: 14th
STANDINGS: 5th
RECAP: Johnson began the day in 11th position, but by the restart after the lap-20 competition caution, he had moved into the top five. By lap 28, he was in third place before a cycle of green-flag pit stops began. Johnson took the green flag on a restart after a lap-67 caution in 13th position, but picked up three spots in three laps to move into the top 10. He took four tires, fuel and a chassis adjustment during a pit stop after the yellow caution flag waved on lap 96, and from there continued to run in the top 10 until the restart following the lap-138 caution, when he fell just outside of the top 10. He ultimately took the checkered flag in 14th position.

DALE EARNHARDT JR., NO. 88 NATIONAL GUARD CHEVROLET SS
FINISHED: 9th
STANDINGS: 2nd
RECAP: Earnhardt rolled off the grid 23rd, and by lap 26 he had moved into the top 10. At that point, all four Hendrick Motorsports cars were in the top 10. A green-flag pit stop on lap 66 in which he took four tires, fuel and a chassis adjustment helped Earnhardt benefit as the “lucky dog” when the caution flag waved on lap 67. At the restart, he was in 29th as the last car on the lead lap. But he continued to battle back from that spot for the remainder of the race, moving up as far as ninth place with eight laps to go, which is where he would finish.

NEXT POST
Carl Edwards Out At Roush Fenway Racing