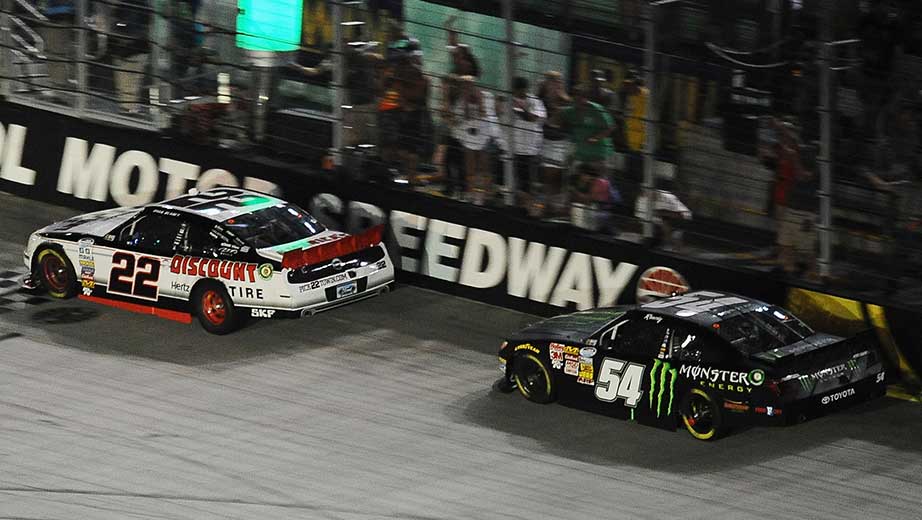 BRISTOL, Tenn. – Kyle Busch, dominant for most of the night, looking to lead the Bristol Nationwide Results 2014 in Friday’s Food City 300 NASCAR Nationwide Series race at Bristol Motor Speedway, lost the lead on a late restart, and then lost the race when he couldn’t track down eventual winner Ryan Blaney.

Busch, riding a three-race win streak at BMS, led twice for 161 of the race’s 300 laps. But when the green flag dropped for the final time, for a seven-lap shootout, Blaney’s No. 22 Ford (Team Penske) shot into the lead and never looked back.

“The leader is at the biggest disadvantage on restarts,” said Busch. “I know when I want to go but everybody else is pushing me. My rear tires aren’t on the ground and you can’t go anywhere.”

Blaney, he said, was “running faster than me by the first double-yellow stripe and I didn’t go because I didn’t want to go; but everybody behind me is trying to go because they’re following (Blaney).”

Series director Wayne Auton said officials didn’t see anything that they felt that was out of line on the restarts, including the final one that ultimately decided the race.

“We saw the (restart) and made a no-call and that was the right call,” Auton said.

“It’s stupid,” Busch said. “NASCAR doesn’t police it so everybody keeps jacking around on it and you know one of these days I’m just going to lock all four down and stack the whole field up.

“He ended up going really late, and then we got to the second mark and he didn’t go, so I went. I heard he said after the race that the 7 car (of Regan Smith) jacked him up, so we were able to get away and make a few good laps there in front of him.”

Busch had chosen the outside lane for the restart, with Blaney on the inside. Smith was behind Busch while Elliott trailed Blaney.

Elliott wasn’t aware of contact between Smith and Busch, and said everyone was dealing with tire spin on the restarts.

“I think when (Kyle) initially go on the gas he got ’em spinning,” he said. “Ryan didn’t spin his tires as bad, kind of gave (Kyle) a chance to get back going … and at that point (Ryan) took off. No harm, no foul in my opinion. I thought it was just a restart that one guy spun his tires and the other guy capitalized.”