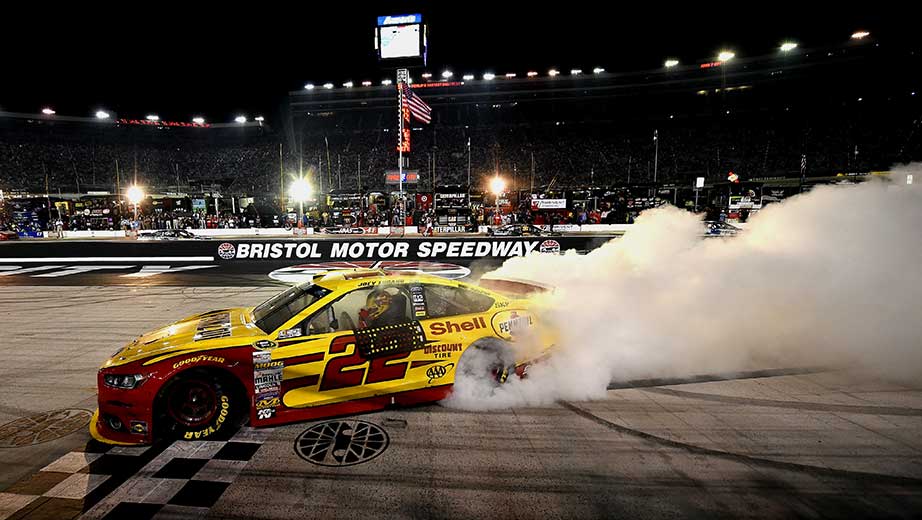 BRISTOL, Tenn. — Joey Logano believes he has the car, and Team Penske believes they have the team, to win the NASCAR Sprint Cup Series championship.

Logano took the lead from Matt Kenseth with 44 laps remaining and scooted to his third Sprint Cup victory of the season in Saturday’s IRWIN Tools Night Race at Bristol Motor Speedway.

“We can win the championship. We’ve showed it at every kind of race track. We’ve just got to keep doing it,” said Logano, 24, who held off his Penske teammate Brad Keselowski in the final laps.

“What a year we’re having. I’m having so much fun. The past six or seven races have been unbelievable.”

Logano has finished no worse than sixth in any of the last five races, but took special pride in winning at the track known as “The World’s Fastest Half-Mile.”

“It’s just the baddest mama jama race track ever built,” said Logano, who just two years ago was struggling with a loss of confidence at Joe Gibbs Racing.

“At that point, I would never think I’d have a year like this,” he said. “That’s why the mental side of this is just as important as the physical side. But I’m happy I went through all that. It’s made me what I am now and made me aware of how I have to be, mentally, to win these things.”

It was a big weekend for both Penske and Ford Racing, with Keselowski winning the NASCARCamping World Truck Series event in a truck he owns, Ryan Blaney winning for Penske in theNASCAR Nationwide Series race and Logano and Keselowski finishing 1-2 in the main event.

“I think we’re legitimate threats to win a championship this year and I’m proud of that,” said Keselowski, the 2012 Sprint Cup champion and the ‘old man’ of the group at 30. “To have all three drivers win races, I think that’s a testament to how bright the future is. I think the results speak for themselves. We’ve just got to keep rolling.”

This weekend also brought the first Ford Racing sweep of a NASCAR weekend series since 2006, when Mark Martin won in Truck and Matt Kenseth won both the Nationwide and Sprint Cup races at Bristol. Ford’s nine Sprint Cup victories this season are its most since 2008, when the manufacturer won 11 times.

Like Logano, Keselowski has three victories this season. The difference between the two drivers on Saturday was minimal.

“I think our two cars were really, really equal,” Keselowski said. “Whoever got out front and got the clean air first was going to win the race and Joey was able to do that.

“The last lap I just dive-bombed it in there on a prayer, kind of hoping it would stick or he would slip or something would happen for me. It made it look cool but it really wasn’t that close.”

Team Penske Executive Vice President Walt Czarnecki couldn’t be happier with the way things are working out with his team in its second year with Ford.

Saturday,  Logano had fresher tires than Kenseth, who elected not to pit under caution when he took the lead from Jamie McMurray during the race’s ninth caution on Lap 433 of 500.

McMurray, who led a race-high 148 laps, said his car “got really tight” in the final 100 laps and settled for eighth place. “As the track rubbered up, it just didn’t suit our car as much as it did the other guys’,” he said.

McMurray remains one of a handful of drivers who now need a victory at either Atlanta or Richmond to have any realistic chance of making the Chase.

Clint Bowyer (17th) and Greg Biffle (10th) remained on the positive side of the points bubble for non-winners. Kyle Larson (12th) trails Biffle by 26 points, and Kasey Kahne is 33 points behind Biffle for the 16th and final Chase spot.

Kahne Led 40 laps but suffered recurring issues with his right front wheel and finished 35th on Saturday. Denny Hamlin, who ended up 40th, was as upset as Kahne was disappointed.

Hamlin was leading the race when Kevin Harvick sent him spinning on Lap 162. Dale Earnhardt Jr.side-swiped Hamlin on the way by, putting both Hamlin and Earnhardt (39th) behind the wall and ending promising runs.

“It was a misjudgment. He knows better. He made a mistake,” said Hamlin, who fired a piece of his HANS device off the rear end of Harvick’s car as the new leader circled the track. “He thinks he knows everything. I just wish I had some kind of car left to show him the favor back.”