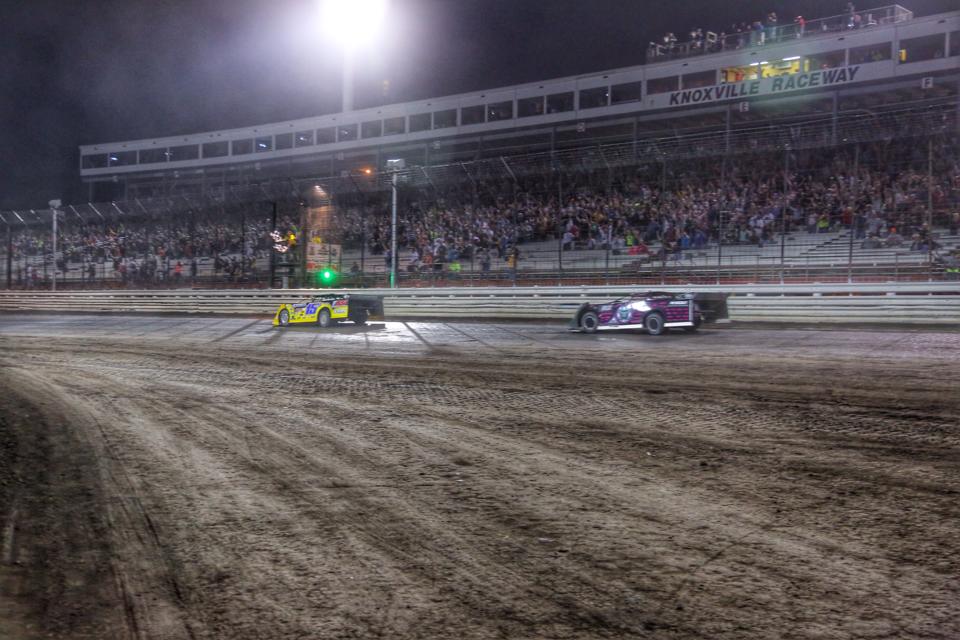 Scott Bloomquist broke on the final lap, coming to a stop in turn two after finishing 2nd.

The Iowa boy, Brian Birkhofer, made a final lap pass of leader Scott Bloomquist to capture the 11th annual Lucas Oil Late Model Knoxville Nationals. The winning pass came as those two front runners roared out of turn four heading toward the checkered flags. Birkhofer who had won the very first event in 2004 flew out of the turn passing Bloomquist and heading under the flag stand to win the $40,000 event.

Scott Bloomquist, who had led from lap 62 finished second and slowed his machine to a stop in turn two. At the victory stand ceremonies he said that the rear end and drive shaft had broken as he went into turn three on that final lap. He was paid $20,000 for his efforts. Bloomquist captured wins in 2005 & 2009.

As Brian Birkhofer exited his car in victory lane he kissed the roof of it for good measure. All week the rumor of his retirement filtered though this historical fairgrounds. He confirmed at victory lane that he would indeed take a year away from racing, a somewhat shocking announcement.

“I found a line in one and two and in three and four I thought I was gonna flip,” Birkhofer told the huge crowd about the final lap. “I think he (Bloomquist) was getting tight and I could get through one and two. I lifted for a split second through three and four.”
The final yellow on lap 86 saw Bloomquist in front with Birkhofer on the outside and Mike Marlar on the inside. Marlar had started 23rd at the beginning of this 100 lap race and was arguably the fastest car on the track prior to the caution flag.

“Marlar lined up behind me and I knew I had to take off,” Birkhofer explained. And he did but he could not keep pace at first with the Bloomquist machine. With no traffic in the way Birkhofer fell back slightly and initially fought with Marlar as Bloomquist pulled away. It was that final lap that saw “Birky” push his car to the limit as Bloomquist began to lose his powerful edge.

Brian Birkhofer led this race through the first 30 laps from his pole position. A pesky Darrell Lanigan, the defending champion, finally took the top spot on the 31st go-around after starting along side Birkhofer. At this point Bloomquist was right there with those front runners and trailing was Dale McDowell and Jimmy Mars from 18th. Ten laps later Birkhofer recaptured the lead which he held until the lap 62 Bloomquist seizure of it.

Marlar came across the stripe to take third ($10,000) and Mars was fourth ($8,750). Topping those drives was that of Don O’Neal who started 31st and finished fifth ($7,500). Rounding out the top ten were Steve Francis, Frankie Heckenast Jr., Chase Junghans (from 27th) and Chad Simpson (from 21st). A total of thirty-four cars started the event.

In other racing events, Ryan Gustin led the 12-lap D Main from start to finish but after transferring to the C Main he blew a right rear tire having charged through the pack by the half-way point. That C feature was won by Billy Moyer Jr. as he took charge from the git-go of the 15 lap event.

An exciting B main saw Wendell Wallace take top honors but he was pressed throughout the 20 lap event by Jason Feger and Rick Eckert. Feger lost an engine towards the end as Chase Junghans came on strong in the final laps. Denny Eckrich came from an eighteenth position start to place sixth (and transfer to the championship feature) at final tally much to the delight of the Iowa fans in attendance.