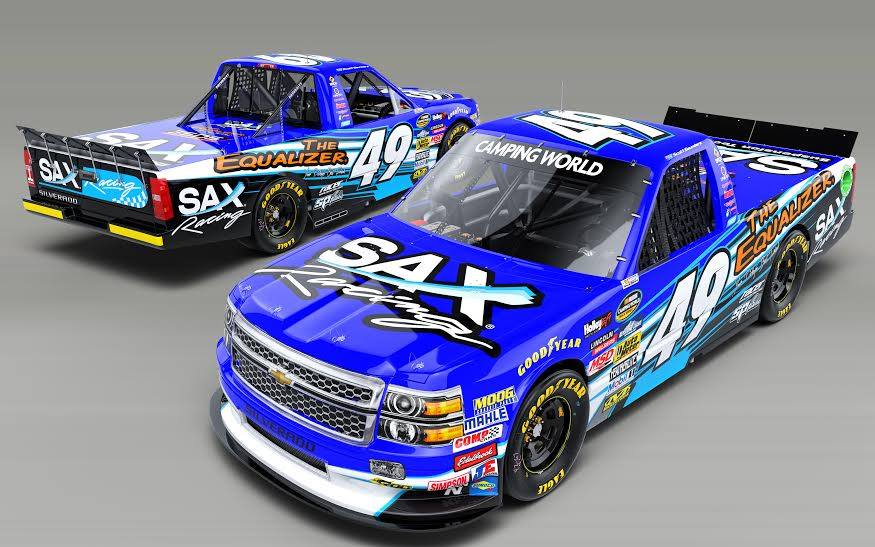 Believed to be a multi-million dollar effort over three years, Roo Motorsports will become the first Australian-owned NASCAR team.
The team has signed Australian Scott Saunders who has been living in the US since 2008 as its driver for the ambitious project.

Roo Motorsports announced the project simultaneously with unveilings in Brisbane and North Carolina.  The team will be based in the heart of NASCAR country at Salisbury in Charlotte.

Saunders will follow in the footsteps of Australia’s first full-time NASCAR driver Marcos Ambrose who started in the truck series in 2006 before graduating to the second tier Nationwide level and then making it to the main Sprint Cup competition.

The reception from the local community has been outstanding – many thanks to Salisbury and Rowan County for making us welcome. – Scott Saunders

His dad, team founder Noel Saunders said: “Roo Motorsports is excited to have Sax suspension join the team. We look forward to working with them over the coming years and in assisting them to make their product a household name.”

Roo Motorsports, the first Australian-owned NASCAR team, was welcomed to the community during a gathering at the RowanWorks offices on East Innes Street in downtown Salisbury. The team is based in the Speedway Business Park just east of Interstate 85 near the Peach Orchard Road exit.

The team’s driver, Scott Saunders, was on hand to meet business and public officials from around the county. There was also a simultaneous video stream as the team held a press conference in Brisbane, Australia, at 10 a.m. local time to announce a long-term title sponsor for the team.

Scott Saunders was born in Australia but has lived in the U.S. since he was a teenager, said the new team is a dream come true for him and his father, Noel, a former race car driver.

Scott Saunders has won multiple karting championships around the world before coming to NASCAR about five years ago, said racing for other NASCAR teams wasn’t working out for him and his sponsors, who are mostly Australian. So a couple of years ago him and his dad began forming their own team.

Beginning next year, Scott, who is currently the team’s only driver, will race full time in the NASCAR Truck Series. He said the goal is to reach the Nationwide Series in two or three years.

Saunders, 25, said his team was working out of Mooresville but came to Rowan County because they wanted a place that wasn’t surrounded by other NASCAR teams. He is currently living in Concord, but said he is moving to Kannapolis soon.

Brett Stone, who does marketing for the team, told the dozens of people in attendance that Roo Motorsports is happy to be in Rowan County and looks forward to working with the community. He said the team plans to have a real presence in the community, and that they’re thankful for the support they’ve already received.

RowanWorks Executive Director Robert Van Geons thanked the team for making an investment in the community.  Regarding the good turnout at the event, Elaine Spalding, Rowan County Chamber of Commerce president, said, “It just really speaks to how welcoming the business community of Rowan County is.”

JOB: Making sure that we are proud Australians and we tick all the box’s. He joined Roo 2013. Noel started Roo Motorsport while sitting at Texas International Airport after racing at Kansas in the Nationwide Series, and said let’s make this a Aussie thing.

JOB: Looking after our team partners and keeping the boss happy. Joined Roo Motorsports in 2013.