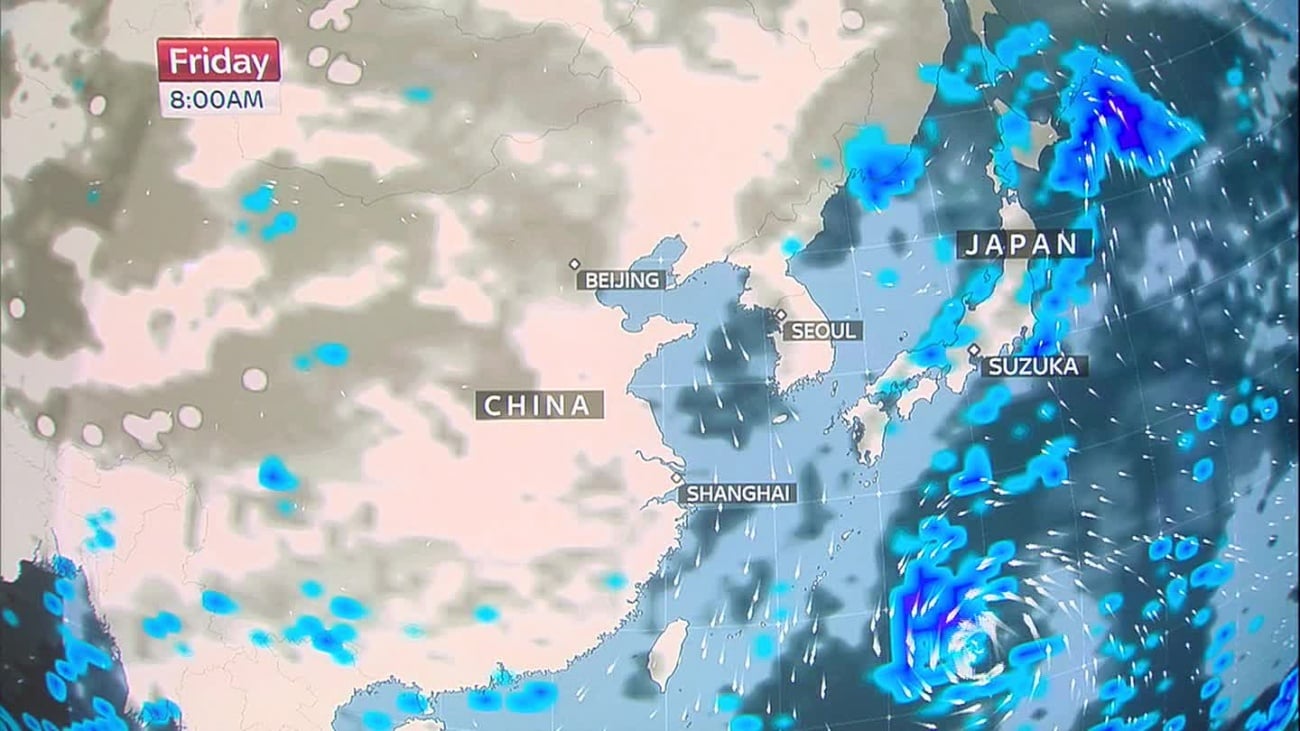 A rain storm descended on the Suzuka paddock on Thursday, but worse may still be to follow with Typhoon Phanfone brewing off the Japanese mainland.

Although the storm is not forecast to disrupt practice on Friday, Sky Sports News Weather have warned that it could bring “very wet conditions” for Saturday’s qualifying hour.

More “heavy rain” is predicted for Sunday, with the typhoon estimated to hit land approximately 100 miles from the isolated Suzuka circuit.

“We might not race because it may be too harsh to race in these conditions,” reported Force India driver Sergio Perez as the sport considered the implications of the predicted onslaught from Mother Nature.

The typhoon is then expected to turn north, hitting mainland Japan on Monday, with torrential rain and destructive winds – up to 150mph in strength – forecast.

While the F1 fraternity may thus be spared the worst of the storm, travel plans – including freight shipments – for next week’s Russian GP could be severely disrupted.

Sky Sports News HQ understands that while the FIA are not yet devising contingency plans, they are open to being flexible with the Sunday schedule should the worst of the weather still be forecast to arrive.

“The FIA are monitoring the situation very closely but they still think it’s too early to start talking about contingency plans. But I understand they are looking into the possibility of being flexible, particularly on Sunday itself,” Sky Sports News HQ’s Craig Slater reported.

“The typhoon is expected to hit around about race time, around about 3pm, so it is conceivable that they might try and run the race a little bit earlier in the day.”

But even if the storm was to strike Suzuka on race day, a postponement of the grand prix is seemingly out of the question given that this week’s event has been placed back-to-back in the calendar with the inaugural Russian GP.

“When it rains here, it really rains properly, so it’s not unusual” noted Sky F1’s Martin Brundle as he dodged Thursday’s showers. “It’s a circuit where we have had monsoon tyres available, that’s the kind of biblical proportions we have had in the past. It’s a costal track, but we have heard this all before and battened down the hatches for storms that haven’t turned up.”

Under the terms of this year’s regulations, the teams are limited to using just four set of intermediate tyres and three sets of the wets for each car over a full race weekend, a cost-saving restriction which may have the unfortunate side-effect of drastically limited running in Friday’s practice sessions in order to save up those precious compounds for the weekend’s main events.

“If it is declared a wet session on Friday then they will be given an extra set of intermediates, but it’s the wets they are going to be short of,” confirmed Brundle. “If it is a wet track in practice then we might see very little running.”

The Japanese GP weekend schedule has twice been affected by adverse weather conditions in the last decade. In 2004 the threat of Typhoon Ma-on saw qualifying rescheduled for race-day morning, while qualy was again postponed to Sunday due to heavy rain in 2010.

Ferrari threatens to leave F1 if they make F1 like NASCAR

Ferrari threatens to pull out of F1 due to NASCAR direction