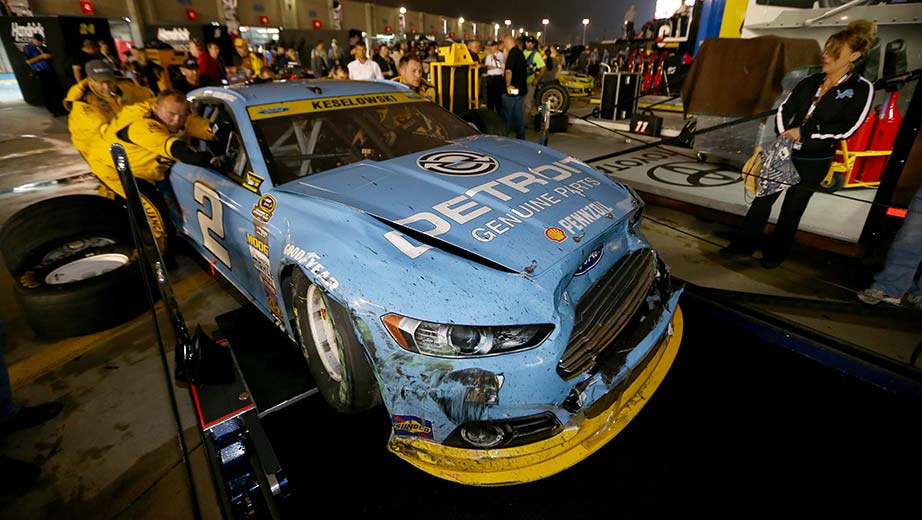 NASCAR fines Tony Stewart and Brad Keselowski on Tuesday. Both drivers were also placed on probation. This was due to their post-race actions following last Saturday’s Bank of America 500 at Charlotte Motor Speedway.

Click here to watch the videos of the incidents.

Keselowski was fined $50,000 and placed on probation through Nov. 12, a span of the next four races in the Chase for the NASCAR Sprint Cup postseason. Officials fined Stewart $25,000 and issued a probation of the same length.

Keselowski is the only one of the two drivers eligible for the title in the Chase. His probation is scheduled to expire before the season-ending championship race atHomestead-Miami Speedway.

Keselowski clipped Denny Hamlin’s rear bumper on the cool-down lap after the race, later hitting Matt Kenseth’s car after Kenseth had removed his seat belt and HANS safety device. Stewart was also caught up in the round of bumper cars, causing the No. 14 driver to retaliate by backing his car into Keselowski’s No. 2, crumpling its front. Keselowski then drove through a garage stall in the Sprint Cup Series garage before parking his car near his hauler.

After getting out of his car, members of Hamlin’s and Kenseth’s teams yelled at Keselowski and his crew. As Keselowski walked between his hauler and his teammate Joey Logano’s hauler, Kenseth ran after Keselowski and things got physical between the two. Eventually, the two were separated by Keselowski’s crew chief, Paul Wolfe.

Neither Hamlin nor Kenseth were penalized.

Keselowski later said that what had him angered at Kenseth was what happened right before the Lap 333 restart.

“When he came by he swung at my car and tore the whole right-front off of it,” Keselowski said. “When we restarted fifth with no right-front on it, we fell all the way back to 16th and it ruined our day. That gave us a big Chase hurt, which is unfortunate, and then for some reason after the race the 11 stopped in front of me and tried to pick a fight, so I don’t know what’s up with that. And he swung and hit my car and I figured if we are going to play car wars, I’ll join too. You know those guys can dish it out but they can’t take it. And I give it back to them and now they want to fight.”

NASCAR asked for Keselowski to come to its hauler Saturday to speak to officials about what happened. A crew member for Kenseth’s No. 20 team, mechanic Jesse Sanders and Kenseth’s crew chief, Jason Ratcliff also came in.

Keselowski finished in 16th place at Charlotte. He enters Sunday’s GEICO 500 at Talladega Superspeedway (2 p.m. ET, ESPN) in 10th place in the Sprint Cup Series points standings. The race is the last chance to advance to the Eliminator Round of the Chase for the NASCAR Sprint Cup.

PREV POST
Brad Keselowski vs Matt Kenseth and Everyone At Charlotte