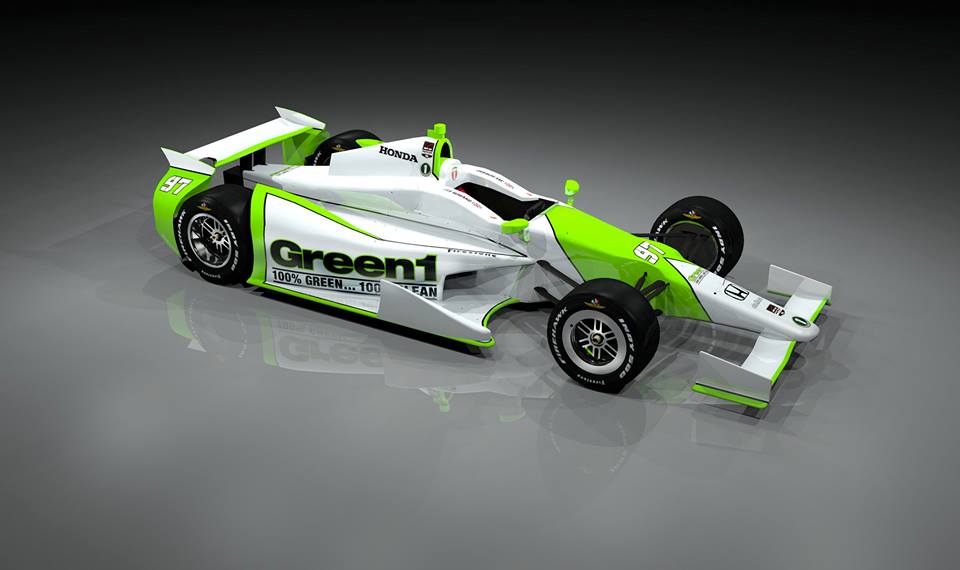 Indycar driver Jay Howard joins Bryan Herta Autosport in partnership with BBM. It was announced today they will field an entry boasting primary sponsorship from Green1 in the 2015 Indianapolis 500.

The car will carry #97 and be driven by Indianapolis based driver Jay Howard. 2015 will mark BHA’s fifth year competing in Indianapolis, and is expected to mark the team’s first time fielding two cars in the May classic.

The car shown is the Bryan Herta Autosport 2015 car driven by Jay Howard in the series. The Green1 Indycar paint scheme was released today.

Green 1 has been a supporter of Indycar and the BHA team for several years, but this will mark their most significant partnership to date. “Green1 decided to invest in the BHA Indy Car team and selected the historic Indianapolis 500 race event platform for several reasons; the track boasts the largest solar farm of any sports venue in the world, the race cars run on 100% renewable fuel, it is the largest single day sporting event in the world and, BHA is a proven Indy 500 event winner and Bryan Herta along with Jay Howard are high class, high integrity individuals” stated Ray Drysdale Founder of Green1.

“Although this is early to announce an Indy 500 entry, we wanted to put this exciting news out right away.  We have been using Green1 in our shop for years now and believe in the quality of the product as well as the performance and safety it gives us. We will be working closely in the upcoming months with the team at Green1 to seek additional partners who share Green1’s vision and core values to expand this program to additional races and venues with Jay at the wheel,” noted team principal Bryan Herta.

Jay Howard has won multiple junior races and championships including the 2006 Indy Lights (then known as the Indy Pro Series) Title, and has entered fourteen Indycar races. The last Jay Howard Indycar start came in 2011, and this will be his third entry at Indy. “There are no words that can describe how happy I am for this opportunity. The entire BHA team from Bryan, BBM, the guys in the shop, they all have the same determination and passion to win as I do, so it is a perfect fit. I have personal knowledge in what a unique industry changing technology Green1 is, and piloting the car for the Green1 alliance will be an honor. I am also on board in doing my part, by sharing my knowledge and helping make the world a better, safer, cleaner, place.”