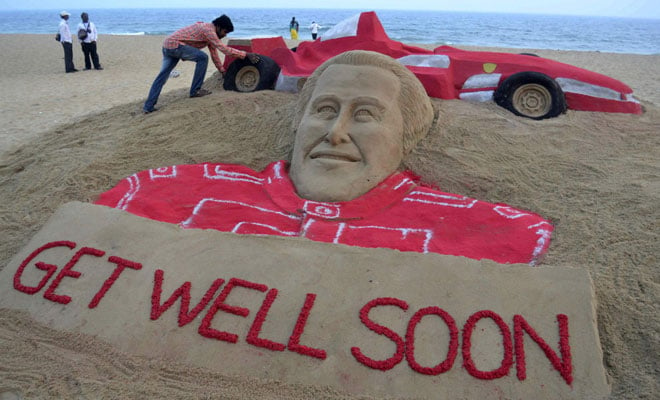 Here’s an official Michael Schumacher Update from doctor’s and those close to the former F1 driver. We’ve been hearing rumblings that Schumacher, though unable to move or speak, is showing signs that he is still in there.

Michael Schumacher often cries when he hears the voices of his family members, according to a report in the Italian magazine Autosprint.

This week, the F1 legend’s manager and doctor hit back at claims by former driver Philippe Streiff, who declared that while Schumacher is unable to speak, he is “starting to recognize those close to him”.

When not undergoing physical therapy to avoid muscle atrophy, he sits in a chair in front of the windows of his villa

Official information has been thin on the ground throughout the full year since the former Ferrari and Mercedes driver’s skiing crash last December.

But as the authoritative Autosprint’s editor-in-chief Alberto Sabbatini writes, the health and future of one of the world’s greatest ever sportsmen is “on everyone’s mind”.

The report said its information has been collected “as objectively as possible”, based on “reliable and verified information” from “those who know and have seen him recently and are aware of his clinical status”.

It is a sign that he is alive and understands, even if for now he is the prisoner of an immobile body.

Sabbatini concluded that Schumacher is making a “very slow recovery”, adding: “The good news is that Michael is not stuck in a bed.

“When not undergoing physical therapy to avoid muscle atrophy, he sits in a chair in front of the windows of his villa, overlooking on one side the snowy peaks of the Swiss alps, and on the other the shores of Lake Geneva.

‘Often looking into the void’

“Michael has his eyes open,” he continued, “but he is often looking into the void.

“In recent times, he has been able to recognize the familiar faces of his family, but he cannot communicate with them. He does not speak and he is not able to perform movements independently.

“He reacts to external stimuli but for now can only answer a familiar voice by moving his eyes.

“In a wonderful article in the Corriere della Sera on Sunday, Giorgio Terruzzi said that sometimes a tear rolls down Michael’s face. He cries when he hears the voice of his children or Corinna.

“It shows that he feels emotion. That his brain works. It is the only way his strong character is able to externally convey an emotion. It is a sign that he is alive and understands, even if for now he is the prisoner of an immobile body,” Sabbatini added.