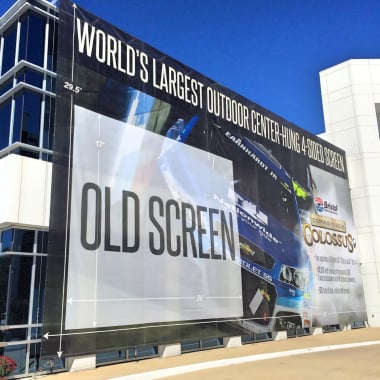 The Last Great Colosseum will soon be the home of the world’s largest outdoor, permanent, center-hung digital display, officials announced Wednesday. The display, named Colossus, will plunge fans into the color, roar and rumble of events through four high-resolution screens and a thunderous sound system, making the Bristol experience more immersive than ever before.

“Combine all the energy and excitement of Bristol with the ultimate home theater system, and you’ve got Colossus,” said Jerry Caldwell, executive vice president and general manager of Bristol Motor Speedway (BMS). “The size, resolution, and sound of this display will draw our guests into every bit of action on the track and in the infield.”

Each of Colossus’ four custom-built screens is approximately 30 feet tall by 63 feet wide. In total, the system hosts nearly 54 million LEDs and 18 million pixels. At 6mm pitch, the pixels are grouped tighter than the large-scale outdoor displays in Times Square. The result: a glimmering visual experience capable of offering 281 trillion different color combinations, and one that’s 23 times brighter and 25 percent sharper than the typical home HD TV.

The display will hang from a halo-shaped truss and features an additional circular LED display beneath the screens which measures nearly six feet in height. Between the screens and the LED ring, that’s more than 8,500 square feet of high-resolution, active viewing area.

The scale and quality of the project draws on the technology solutions expertise of partners such as Panasonic, a company known for creating large displays in numerous iconic sports venues across the U.S., including other Speedway Motorsports, Inc., (SMI) tracks like Charlotte and Texas Motor Speedways.

“Panasonic is honored to be chosen by Bristol Motor Speedway as their technology partner for a project that so dramatically transforms the fan experience,” said Douglas Moss, senior vice president, Marketing and Sales, president of Panasonic Enterprise Solutions Company.  “We worked closely with Bristol to recommend a unique, high-end technology solution that we believe is a true game-changer.  Colossus lives up to its name in every respect, creating a completely immersive fan experience with its sheer size, unparalleled resolution and imaging crispness.  Panasonic has a proud relationship with Speedway Motorsports, Inc., delivering customized technology solutions to SMI-owned and operated member race tracks, a legacy that continues to grow and now includes Bristol as the latest high-profile success story.”

Once the build begins in November, the track’s existing pylon and screen frame will be removed, clearing the infield for next year’s NASCAR events and the Battle at Bristol, college football’s biggest-ever game. Colossus will rise via four massive support towers ranging in height from 190-220 feet and weighing in at approximately 437 tons. These will be positioned outside the bowl, and the display will then be suspended over the infield by miles of cabling, the largest of which exceeds the diameter of the vertical cables supporting the Golden Gate Bridge.

Rentenbach Constructors of Knoxville, Tenn. is taking on the build of the structure. “It’s a real thrill for Rentenbach to be back at BMS to help install this exciting piece of technology,” said Don Freeman, chairman, Rentenbach Constructors, a Christman Company.  “Construction of the Speedway continues to be a special point of pride for everyone at our company, and the chance to do more than be on the sidelines cheering at the upcoming Battle at Bristol will make this once-in-a-lifetime game day even more special.”

According to Caldwell, Colossus will be ready to dazzle guests at the Spring 2016 NASCAR race. Throughout the year, BMS will demonstrate one of Colossus’ additional design elements: the ability to transfer screens around the facility for events like the NHRA Thunder Valley Nationals in June and the track’s annual holiday celebration, Speedway in Lights.

“Colossus will transform the way we see, hear and experience events at Bristol, and provide additional opportunities for events here,” said Caldwell. “We’re fortunate to have entrepreneurs and owners like Bruton and Marcus Smith who care about providing fans with the best possible entertainment experience.”