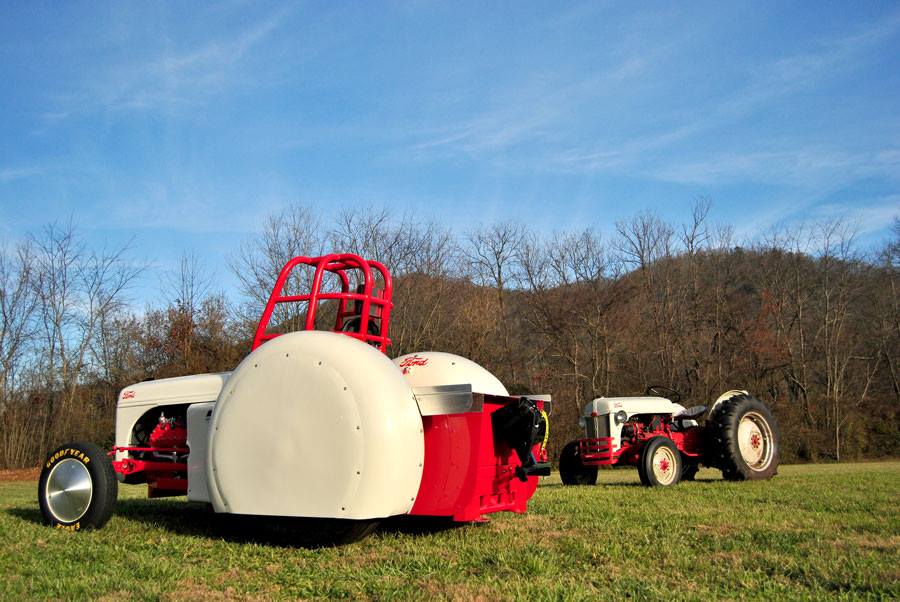 Jack Donohue had a career in NASCAR, where he worked as a car builder, mechanic and occasionally as an independent car owner and driver. Donohue’s racing business … Jack Donohue Motorsports, located in Fletcher North Carolina, is completely dedicated to 8N Ford Farm Tractors.

SPARE TIME
Throughout his 30+ years in racing, Donohue worked on the famed “Red Belly” tractors as a hobby. “NASCAR racing and all the traveling can really grind you down.“ Donohue said. “To me, the 8N tractors were great diversion. I restored several in my spare time, even upgraded a few to V8s.”

LOVE AND GOLD DUST
Jack saw his first 8N Ford tractor at 8 years old, when a brand new 1952 model was delivered to his family’s dairy farm. “It was love at first sight.“ Donohue said. “I remember it like it was yesterday. It was a bright fall day when it arrived and that little tractor gleamed in the sunlight like it was covered in gold dust. I don’t think there’s been a time since that day, that I haven’t had an 8N close by me. They are truly my heart.“

FUNK V8 CONVERSIONS
Back in the day, you could get a brand new 8N Ford tractor equipped with a flathead V8. An upgrade called a Funk Conversion Kit, was available to Ford tractor dealers as an accessory to be installed on new 8N tractors. The dealer could replace the existing four cylinder engine with a 100 Horsepower Ford flathead V8. The conversion Kit consisted mainly of a cast iron oil pan, a larger radiator and some hood clearance hardware. The Funk Aircraft Company, in Coffeyville Kansas, officially stopped making the kits in the fall of 1952 when production of the legendary 8N ended. Today tractors can still being converted to V8s, using the various aftermarket engine cradle/adapter plate kits that are available.

SHOP PROJECT
Jack Donohue Motorsports is strictly into 8N Ford tractors, primarily V8 conversions and restorations. Jack’s newest shop project is a land speed racing version of an 8N tractor that he has dubbed his “8NCREDIBLE.” Donohue said, “It’s the racer in me I guess. I just have to try and see how fast I can make one of these tractors go.”

THE CHALLENGE
The challenge of building and handling cars capable of 200+ mph speeds on the NASCAR tracks, was Jack Donohue’s profession. Building a farm tractor into a racing machine… may be his biggest challenge to date. A challenge indeed. It’s a big undertaking to make a 62-year-old farm tractor and not only make it run fast, but have it meet all the modern day race vehicle safety requirements. After all that, take it to Utah and the famed Bonneville land speed record salt flats, get past their pre-race vehicle inspections and then try to best an amazing record set there 80 years ago.

AB JENKINS AND BONNEVILLE
In 1935, famed world land speed racer and former mayor of Salt Lake City David Abbot “Ab.” Jenkins, drove a factory-backed Allis Chalmers farm tractor to a speed of 67 miles an hour at Bonneville. “Pretty remarkable” Donohue said. “Just finding a passenger car capable of running that fast on the highway would have been rare back in those days.“ Certainly not for the faint of heart. Jenkins is quoted as saying that his 1935 tractor run was “like trying to hold onto a wild bison.“ Jenkins never attempted to run the salt with a tractor again. In fact, there has never been another farm tractor on the salt at Bonneville in its 100 year history!

ALLIS CHALMERS TRACTORS AND FIRESTONE TIRES
The Jenkins 1935 salt flats speed run was a demonstration backed by farm machinery producer Allis Chalmers and tire manufacturer Harvey Firestone. The run was to convince farmers skeptical of the durability of rubber tires on farm tractors. Allis Chalmers, based in West Allis Wisconsin, is credited with being the first to offer tires as an option on tractors. Tractors during that time, were equipped with steel wheels and farmers were very reluctant make the switch.

PLOWED GROUND AND TOWN KIDS
Donohue admits that “a need for speed“ and a lifetime of modifying garden–variety vehicles to perform above and beyond their original design, is definitely a motivating factor behind his racing tractor project. His passion for 8N tractors dates back to his childhood on the farm. Donohue said, “Most town kids had bicycles to get around. I never had one and got ribbed, but I didn’t feel bad. Out where we lived, barnyards, plowed ground, cow pastures and hayfields were no place for a bike. The good news was, my little tractor could go anywhere I wanted to go and get there fast.” Long before he was old enough to drive a car or get driver’s license, Jack’s tractor was his car. “I ran to town with it, visited the neighbors, pulled parade floats and even drove it to school if wasn’t needed at home and the best part was, my 8N could outrun and wear out any kid on a bicycle,“ he said.

SPEED WOBBLES AND FLOYD’S BARBER SHOP
Since the news of Jack’s 8NCREDIBLE has been getting out, there’s been an unusually high amount of drop in visitors to Jack’s shop lately. Fletcher area farmers who like Jack, grew up with Ford tractors and know them inside and out, are among the most frequent guests. “Heck, the place is turning into Floyd’s Barber shop,“ Jack said laughing. Of course, the most asked question besides “How fast do you think it’ll run,” is “how will you hold onto ‘er? You know those 8Ns always go into a speed wobble in high gear!“

Donohue won’t go into specifics, but says with a wide grin and a twinkle in his eye, “After making race cars handle the super speedway ovals, I think we can make an 8N Ford tractor run in a straight line for a ways and surely after 80 years, I hope we can at least match Ab Jenkin’s 67 miles an hour,” he said.

MISSION COMPLETE
Jack Donohue and his Ford 8N Tractor has since topped 96mph.