Pepsi Max Back to the Future V8 Supercar from Prodrive Racing 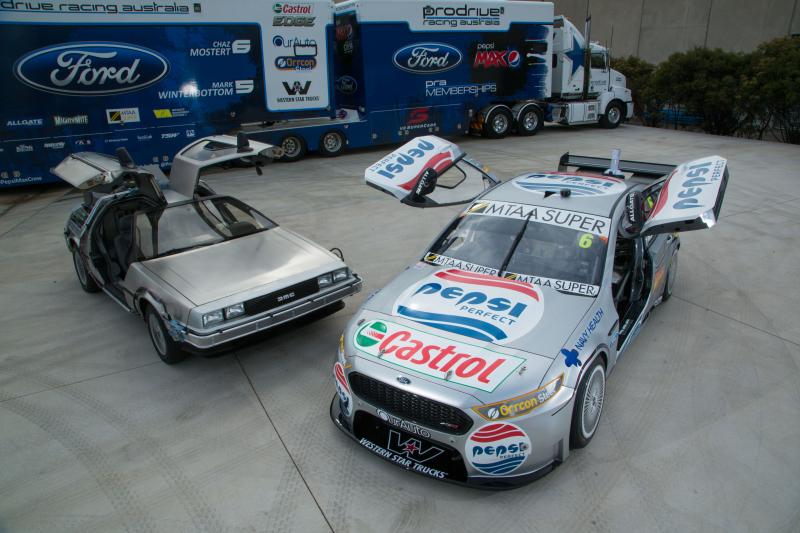 Today (21 October, 2015) marks the date Michael J Fox’s character Marty McFly travels through time to the future in the second edition of the Back to the Future franchise.

With a strong presence from Pepsi throughout the movies the Pepsi Max Crew with drivers Mark Winterbottom and Chaz Mostert, wanted to pay tribute to the film, its characters and importantly, its iconic DeLorean time machine.

For this weekend’s Castrol Gold Coast 600 race event the team’s #6 Pepsi Max Crew PRA Ford, normally driven by the currently injured Chaz Mostert, will take on the unique stainless steel look of the movie time machine, complete with all the additions and Pepsi Perfect branding as a tribute to the famous soda that Marty McFly orders in the second movie.

Drivers Cameron Waters and stand-in, Russell Ingall, will have gullwing doors, a flux capacitor, thrusters and a Mr Fusion at their disposal as per the movie time machine.

The unique car conversion project is the first of its kind in V8 Supercars and will capture the attention of the movie’s legions of fans around the globe.

“This is without doubt one of the best activations I’ve seen in nearly 30 years in the motorsport industry,” said Prodrive Racing Team Principal, Tim Edwards.

“The lengths the entire team have gone to in order to prepare the car are just fantastic. Every department has played some role and the finished product looks amazing on the big screen and in the flesh.

“It is a shame that Chaz won’t be around to drive it but he’ll appreciate it more now he is watching from his hospital bed,” Edwards said of Mostert who is still recovering from injuries sustained in his Bathurst qualifying crash.

The Prodrive Racing team modified existing doors from the team’s FG X Falcon race car to create gas-powered gullwing doors similar to those on the DeLorean.

The team hand-built thrusters for the rear of the car and fitted authentic replica Flux Capacitor and Mr Fusion devices, while also sourcing a unique stainless-steel-effect vinyl wrap to form the body of the race car.

“We were surprised when we were asked to turn our Ford V8 Supercar into a DeLorean time machine but once we worked out what we needed to achieve, it became a real passion project for everyone involved in preparing the car,” Cockerell said.

“Modifying and making the gullwing doors without changing the car was a big challenge. Making them look like they were actually part of the car was the hardest part so I hope our fans and fans of the movie appreciate how much effort has gone into this car.”

Current V8 Supercars Championship leader, Mark Winterbottom, has a starring role in the team’s short film and enjoyed paying tribute to a movie he grew up with.

“Everyone my age grew up wanting to do what Marty and the Doc did and the DeLorean was a really cool car so to actually get to drive one and recreate parts of the movie in the way we have is really cool,” the 34-year-old said.

“Thanks to Pepsi and Pepsi Perfect we’ve been able to live out a bit of our childhood. While I am no actor I enjoyed the filming and to see Tim playing Doc Brown and Chaz and Russell get into the swing of things was cool.”

The Pepsi Perfect #6 PRA Ford will hit the track with Waters and Ingall at the wheel this weekend for the Castrol Gold Coast 600, the final event in the Enduro Cup.

Pepsi Max Back to the Future V8 Supercar Photos

Pepsi Max Back to the Future V8 Supercar Video