CONCORD, N.C. (Nov. 8, 2015) — Jonathan Davenport of Blairsville, Ga., topped off his dream 2015 season with a final flourish, rolling to a convincing victory in Sunday’s 50-lap Bad Boy Buggies World of Outlaws World Finals finale at The Dirt Track at Charlotte.

The 32-year-old superstar passed Darrell Lanigan of Union, Ky., for the lead on lap 31 and never looked back in the season-ending World of Outlaws Late Model Series event, which was postponed one day by wet weather.

“Just to cap off this season we’ve had with this makes it extra special,” said Davenport, who previously won World Finals features in 2010 and ’11. “We can go into the winter with a big smile.”

Starting sixth in the 31-car field, Davenport steered his K&L Rumley Longhorn Race Car to third on the race’s opening circuit and reached second place by lap five. He briefly fell to third place when Lanigan passed him and early pacesetter Chris Madden of Gray Court, S.C., for the lead on lap 11, but the indomitable Davenport regained second from Madden on a lap-18 restart and snuck underneath Lanigan for the top spot in turn two on the 31st lap.

Davenport dominated the remainder of the distance, crossing the finish line 1.557 seconds in front of the polesitting Lanigan for his fourth World of Outlaws Late Model Series victory of the season and the sixth of his career.

Madden settled for third place after starting from the outside pole. Jimmy Owens of Newport, Tenn., who won the World Finals finale in five of the past six years, finished fourth and Lanigan’s Clint Bowyer Racing teammate, Don O’Neal of Martinsville, Ind., climbed forward from the 12th starting spot to place fifth.

Shane Clanton of Zebulon, Ga., was never a factor despite starting third, fading backward when the green flag flew and finishing a quiet ninth. But he still showed plenty of enthusiasm after the race when he celebrated his first-ever WoO LMS championship, which he clinched by starting Friday night’s World Finals A-Main.

“It’s a dream come true,” the 40-year-old Clanton said after being presented his WoO championship trophy during the post-race ceremonies. “We’ve won a lot of big races but we’ve never put a whole season together. To put one together like we have this year, it’s pretty special.”

Clanton won a career-best 10 WoO LMS features and registered 34 top-five and 37 top-10 finishes in 41 features this season driving his father-in-law Ron Davies’s Capital Race Cars. He led the standings from start-to-finish, ending the schedule with a commanding 174-point advantage over Josh Richards of Shinnston, W.Va.

“It’s just a testament to what we’ve done all year,” said Clanton, who will receive his $100,000 WoO LMS title check during the tour’s awards banquet that was rescheduled for Monday at 1 p.m. at the Great Wolf Lodge in Concord, N.C. “Consistency pays off —you look at the record, and we almost tied Darrell (Lanigan) for top-fives in a season and we had like three less races than he had.

“We made a wrong tire choice tonight and didn’t groove them just right, but we’ll come back next year and defend our title and maybe we’ll be standing up here again.”

Davenport preceded Clanton on the post-race winner’s stage. He enjoyed ending a World Finals that began with subpar time-trial results on a high note.

“We didn’t start off too well this weekend,” Davenport said. “We had ignition problems Thursday night (during qualifying), but Friday night we finally got them worked out and I knew we had a good piece here.”

Lanigan, 45, led laps 11-30 after blasting around the outside of both Davenport and Madden to assume command following a restart, but he couldn’t recover after allowing Davenport to slip past him for the lead on lap 31 when he slid high in turn two while working lapped traffic.

“We had a really good piece,” Lanigan said of the Club 29 car he debuted for Clint Bowyer Racing — his recently-acquired ride for 2016 — at the World Finals. “We just got on the outside of a lapped car and he kind of run me up the racetrack and that left the bottom open for Davenport.”

The 40-year-old Madden, meanwhile, wasn’t able to match the speed of Davenport nor Lanigan once the 4/10-mile oval’s surface locked down.

“We had a real good car all weekend,” said Madden, who also finished third in Friday’s A-Main. “We just tightened up too much for the feature. When they dropped the green we were running extremely well, but then the racetrack got a little more grip to it and we just couldn’t steer across the center and these guys were a little bit better.”

Six caution flags dotted the event. Friday-night winner Brandon Sheppard of New Berlin, Ill., slowed to trigger yellow-flag conditions on lap 18 and 34. Other cautions flew for Eric Wells of Hazard, Ky., who spun in turn four and collected Jordan Yaggy of Rochester, Minn., on the opening circuit; Morgan Bagley of Tyler, Texas, who slowed with a flat left-rear tire on lap one; James Rice of Verona, Ky. (turn-three spin on lap 10); and Casey Roberts of Toccoa, Ga., who slowed with mechanical trouble while running fourth on lap 41.

Sixty-eight of the 86 cars that were signed in for Thursday night’s time trials returned for Sunday’s postponed program.

The 2016 WoO LMS season kicks off with six nights of racing during Georgia-Florida Speedway beginning Feb. 12-13 at Screven Motor Speedway in Sylvania, Ga., and continuing Feb. 14 at Bubba Raceway Park in Ocala, Fla., and Feb. 18-20 at Volusia Speedway Park in Barberville, Fla.

For more information on the WoO LMS, visit www.worldofoutlaws.com. 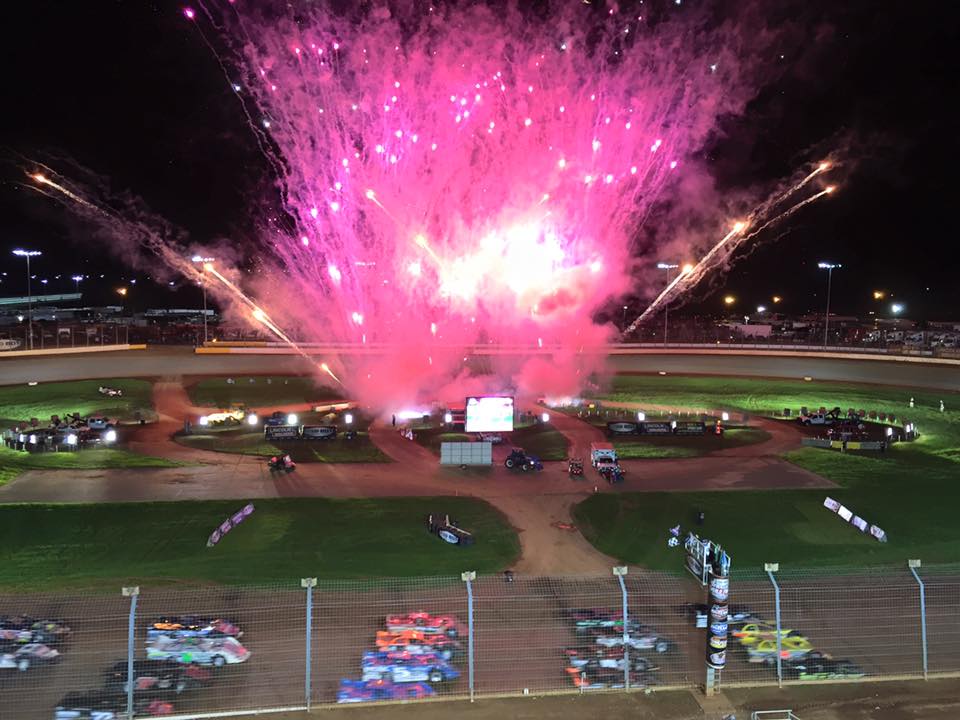