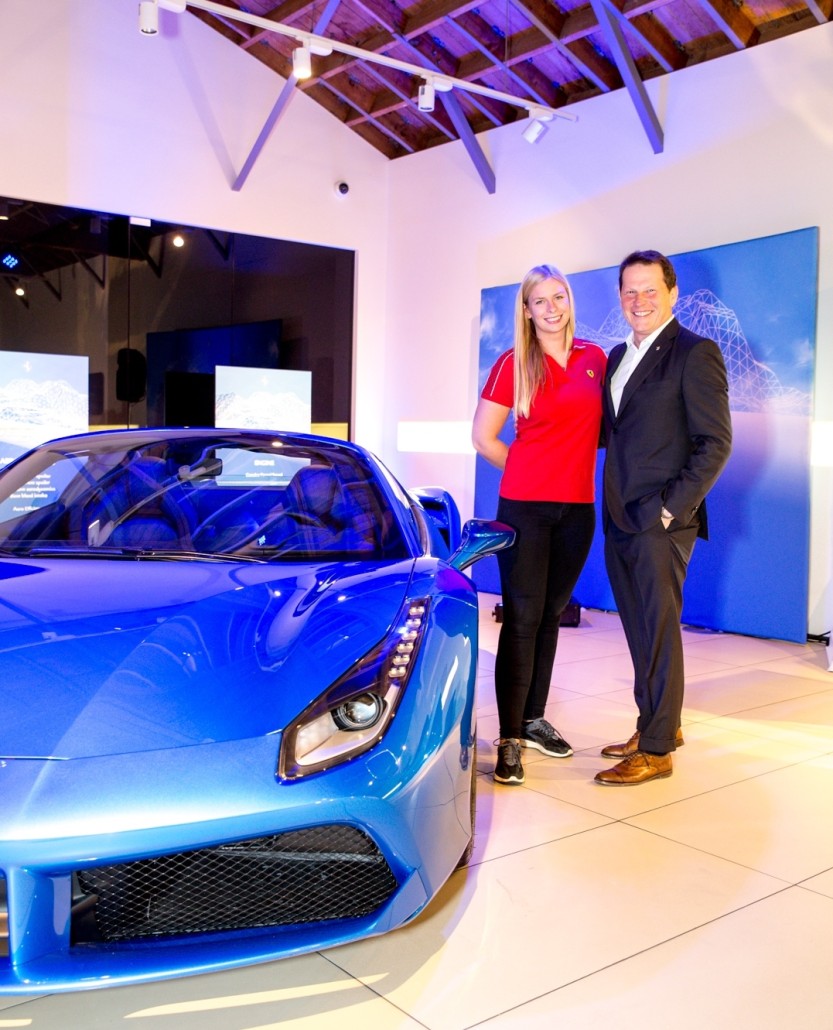 November 18, 2015 (Los Angeles, CA.) – On the heels of capturing its second professional championship in three seasons, Scuderia Corsa is proud to announce that Christina Nielsen will join the team to battle for the GT-Daytona championship in the 2016 WeatherTech SportsCar Championship.

Nielsen, from Hørsholm, Denmark finished as the championship runner-up in GT-Daytona in the 2015 IMSA TUDOR United SportsCar Championship, and captured Rookie of the Year honors in the Pirelli World Challenge. Nielsen’s multi-year deal with Scuderia Corsa will see her be among the first drivers to compete in the new Ferrari 488 GT3 in the competitive GT-Daytona class, which will see continued growth in car count, manufacturer involvement and competitiveness in the 2016 season.

“I’m very honored to have been given the chance to race with Scuderia Corsa and become a part of the Ferrari family” said Nielsen. “I think the new car looks amazing and I can’t wait to race it because i think it’s going to be very competitive. I also want to thank TRG for a great season in 2015 and everything they have done for me. However we were presented an opportunity for 2016 that we just couldn’t say no to and I am very thankful that Giacomo and his team has decided to take me in. I believe in our program 100% and will be back fighting for the top step of the championship”

In the thrilling, rain-affected season finale at Petit Le Mans last month, Scuderia Corsa secured its second professional racing championship in three seasons, capturing the 2015 GT-Daytona team and drivers’ championship, and helped Ferrari to secure the manufacturer’s championship. Scuderia Corsa team owner Giacomo Mattioli views the addition of Nielsen to the team as the first step to securing the team’s next championship.

“We are thrilled that Christina will be joining us in the 2016 WeatherTech championship,” said Mattioli. “We learned quite a bit during last season about what a strong competitor she is. She is a tremendous talent, and a mature racer. With Christina at the wheel we are ready to battle for another championship. I believe our Ferrari #63 will be a contender.”

Ferrari Palm Beach – Providing the exclusive Palm Beach market with a premium inventory of new and pre-owned Ferraris, state-of-the-art facilities and technicians for expert maintenance and repair. Wide World Ferrari – Located in Spring Valley, New York, offering Ferrari customers a premium selection of new and pre-owned Ferraris, expert authorized service and exclusive Ferrari certified body repair.Zonin Prosecco –  Zonini1821’s flagship wine, Zonin Prosecco is a lively, sparkling wine that is essential to having fun Italian-style. It is not just a sparkling wine, but a wine that sparkles. Sonic Tools – Sonic Tools is the North American subsidiary of Sonic Equipment, the world’s market leader in premium hand tools and tool box systems for both commercial and consumer use. The company’s mission is to elevate efficiency in the professional workshop through its premium hand tools and unique tool organization solutions. Sonic Tools’ precision-crafted tools, toolboxes and wall systems are found in the world’s most progressive automotive enterprises, and personal garages. Hublot – A champion of innovation, Hublot revolutionized the watch industry with the introduction of the Big Bang, a multiple award winning timepiece created using a combination of precious metals with rubber. Since then, the Swiss brand has become universally known for the concept, “Art of Fusion.” From in-house watch complications to world-class collaborations such as Ferrari and the Los Angeles Lakers, Hublot is constantly evolving and looking to the future. Passtime – Is a leading designer, manufacturer and distributor of wireless GPS telematics devices for the global automotive industry in the vehicle finance and fleet transportation sectors offering a web-based software portal with a complete end-to-end software solution designed specifically for the automotive industry. Ultratech – A pioneer of laser processing, Ultratech designs, manufactures and markets photolithography and laser processing equipment.

NEXT POST
Kevin Estre Moves from McLaren to Porsche 911