Hendrick Motorsports is a team of 4 and that does has it’s advantages. Dale Jr says he’d block the other 3 drivers if it would help Jeff Gordon win the championship.

This is where Martin Truex Jr is at a disadvantage. As a single car team he doesn’t have any teammates to help him test things in practice.

Beyond practice, Truex also doesn’t have teammates out there to block the other 3 drivers fighting for a championship. Instead he will be blocked more often than his championship competitors.

If it comes down the final laps it would certainly help to have a teammate between you and the closest points chaser behind you. 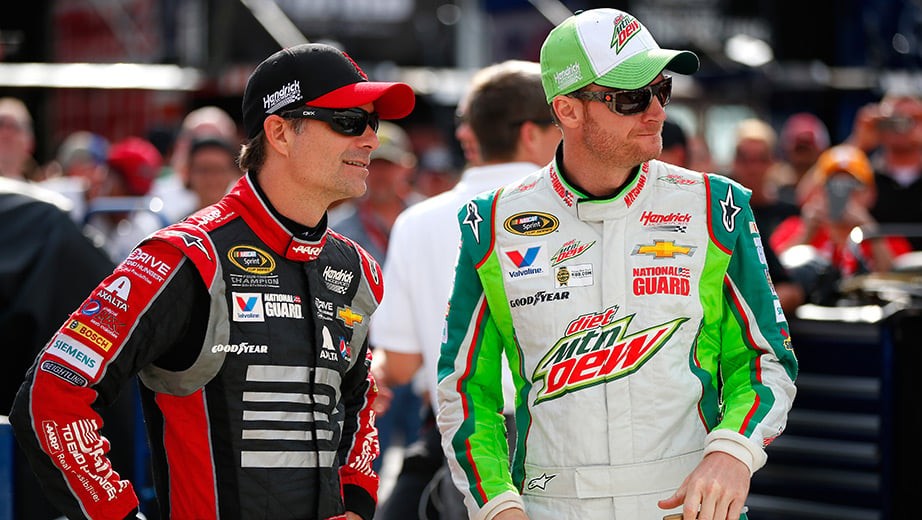 That doesn’t sound like much of a difference but Truex has to fight 3 more drivers harder than the others. At the same time, he has nobody to give him a break.

If each of them makes him fight for 3-5 extra laps to get the spot that could add several seconds to Martin Truex Jr’s race time. That would make it extra difficult for Martin Truex Jr to win the championship this weekend at Homestead-Miami Speedway.

I’m going to obviously pull for my teammate, Jeff Gordon, because I want the boss man (Rick Hendrick) to be happy with Jeff winning the championship, and that’s a hell of a way to go out. He’s been racing for, what, 20-something years now and still has the ability to go out and win races and battle for championships all the way to the very end. What a storybook ending that would be.

But if it came down to it, Junior implied he’d block Truex’s No. 78 Chevrolet — or anyone else — on the final lap if it helped Gordon win his fifth and final premier series title.

“I would block. … I can’t pull over to give (Gordon) a spot, I can’t let him have a position to give him a point, but yeah, I would block,” said Earnhardt. “And I’ll race those other guys (Truex Jr., Kyle Busch, Kevin Harvick) very, very hard when I’m around them. Those other three competitors are going to get some hard competition from me and any of the other teammates that are out there.”