After posting a sixth-place finish in Friday night’s NASCAR Camping World Truck Series season finale at Homestead-Miami (Fla.) Speedway, 19-year-old Erik Jones finished the season 15 points ahead of Tyler Reddick and was crowned the youngest champion in series history. Jones also became the first driver in Truck Series history to capture the Rookie of the Year award and a championship in the same season and in the process delivered Kyle Busch Motorsports (KBM) its first-ever Driver’s Championship and the organization’s record-breaking fourth overall and third consecutive Owner’s Championship.

Over the course of the Truck Series’ 23-race season, Jones collected three wins (Iowa Speedway, Canadian Tire Motorsports Park and Texas Motor Speedway), five poles, 925 laps led, 11 top-five and 20 top-10 finishes. After the eighth race of the season at Gateway Motorsports Park in June, the Michigan native found himself fourth in points, 33 behind Matt Crafton, but rallied back with 15 consecutive top-10 finishes to close out the season, including two of his three wins.

“I think a lot of it was just being with a great team here in Kyle Busch Motorsports and bringing great Tundras to the race track every week. And I think there were definitely times in the year when I didn’t think we’d be able to do this and looking back and seeing the deficit we were in at some points and just being able to really to pull together and make this all happen here at the end of the year, man, it was just so, so special for everybody here. And to close off this run like this – I’ve had a great three years with these guys and I couldn’t think of a better way to thank them.” 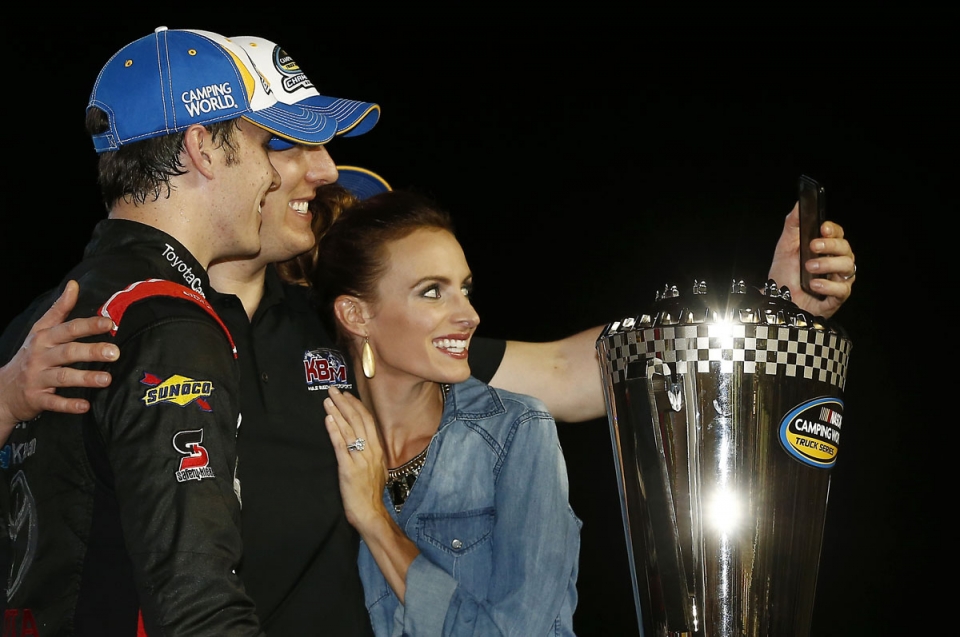 “Well, it’s just special to everyone at Kyle Busch Motorsports,” Busch said when asked about the team’s first-ever Driver’s Championship. “I mean, we’ve been in existence for five seasons and this is obviously – six seasons, I guess – our fourth championship, but our first Driver’s Championship and it means so much more to have the opportunity to help these younger drivers and to help these kids that are coming up through the ranks to succeed and be successful and to do that with Kyle Busch Motorsports and Toyota.

There’s nothing greater than to have that feeling and to build that company from the ground up from nothing and to take it to what it is today. It’s a true honor for Samantha (Busch, wife) and I to be able to accept the Owner’s Championship, but also our first Driver’s Championship with Erik jones this weekend and this team. I mean, it takes all these people back here plus everyone at home back at the shop – chassis shop, body shop, everybody. We do all of our own stuff which is even more impressive that we’re able to accomplish the things that we do here.”