In a season that would make a pretty good movie script, Kyle Busch completed his comeback and bacame the 2015 NASCAR Sprint Cup champion at Homestead.

Busch took home the 2015 championship by being the top finisher in the Ford EcoBoost 400 on Sunday at Homestead-Miami Speedway among the Championship 4-eligible drivers of Kevin Harvick, Jeff Gordon and Martin Truex Jr.

The 2015 season started off in a frightening fashion for Busch. A crash in the season-opening NASCAR XFINITY Series race at Daytona International Speedway left him with a broken right leg and a broken left foot. Busch missed the first 11 points races of the season before returning in the middle of May for the Sprint All-Star Race atCharlotte Motor Speedway. Matt Crafton, David Ragan and Erik Jones each took turns behind the wheel of the No. 18 Toyota for Joe Gibbs Racing.

NASCAR granted Busch a waiver to make the Chase provided he was able to win a race and crack the top 30 in points before the end of the 26-race regular season at Richmond International Raceway.

It took Busch just over a month to find Victory Lane and he did so at SonomaRaceway, holding off his brother Kurt. That sparked a stretch of four wins in five races for the 30-year-old, including three straight wins at Kentucky Speedway,New Hampshire Motor Speedway and Indianapolis Motor Speedway. He nearly pulled off a fourth straight win at Pocono Raceway but ran out of gas on the final lap. 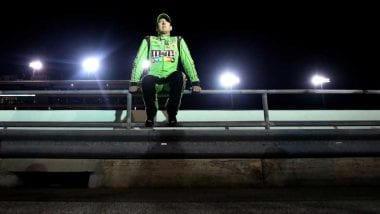 For the second half of the waiver requirement, Busch cracked the top 30 in points after the race at Watkins Glen International in August and secured his spot in the Chase after the Darlington race, which was the second-to-last race of the regular season.

The Chase provided an early test for Busch as a wreck at New Hampshire and a 37th-place finish left him on the outside looking in of advancing to the Contender Round heading to Dover International Speedway. However, he was able to rally to advance with a runner-up finish at the “Monster Mile.”

Contact with Kyle Larson near the entrance of pit road at Charlotte in the Contender Round opener derailed a promising day for Busch and left him needing strong performances at Kansas Speedway and Talladega Superspeedway to make the Eliminator Round. Busch delivered at both, gaining the spots he needed late at Talladega, which was where he was involved in a wreck the previous year that took him out of the Chase.

Busch was a model of consistency in the Eliminator Round with three top-five finishes to advance on points to the Championship 4.

The title season was also a big one off the track for Busch as he and wife Samantha welcomed son Brexton in May, just days after Busch’s return to competition.

The Sprint Cup championship is the first for crew chief Adam Stevens, who was in his first year as a pit boss in the Sprint Cup Series and the fourth (and first since 2005) for team owner Joe Gibbs.