The new “Game Changing” NASCAR Whelen Euro Series car made its racing debut in London the context of the 2015 Race of Champions and it was a resounding success, with some of the best drivers in the world praising the 2016 Euro NASCAR car as one of the fastest and most entertaining to drive in the traditional end-of-season event.

Motorsport legends and top drivers such as Sebastian Vettel, Tom Kristensen and Petter Solberg competed for three days on the 565 meter-long ROC stadium track in wet and dry conditions. The NASCAR Whelen Euro Series cars delighting drivers and the thousands of fans that crowded the Olympic Stadium. All the drivers were impressed by the car’s handling and power and found the new 2016 body style spectacular and fascinating. Due to Friday’s rainy weather, the drivers could also discover how funny it is to drive the 400 hp European NASCAR car in wet conditions, thanks to it’s extremely communicative handling and the grip provided by the tires Michelin developed for the official NASCAR European Series.

Here’s what the Champions said about the new NASCAR Whelen Euro Series car:

Tom Kristensen (9 times Le Mans 24h winner, 2013 FIA WEC Champion): “It is always a pleasure to drive the NASCAR Whelen Euro Series car at Race of Champions. It’s one of the cars I have always a lot of fun! It has a very good handling, there’s a lot of steering lock so you can basically put in the way you want. You have a good feedback from the brake, it’s very hard but I like that. I left-brake and you have to change first, second, third gear all the time, so it’s very busy in the cockpit, but it’s sticking well to the track thanks to the Michelin tires. So it’s a very competitive car on the track, one of the fastest on track. It was the same last year in Barbados and here too it is one of the fastest cars on the lap time.”

Petter Solberg (2003 World Rally Champion and 2014 World Rallycross Champion): “It is really good fun! I remember last year I also enjoyed it a lot and it’s good fun because it’s very progressive to drive and I’m sure many people can drive it much faster but the most important thing is to enjoy it when you drive it, and I did, very much!”

Ryan Hunter Reay (2012 IndyCar Champion and 2014 Indy 500 winner): “The NASCAR is my favourite car so far! Maybe it is because I have had a little bit of experience in a stock car before, but it was a lot of fun. It was one of the fastest when I was in it! It definitely has a lot of power, so you really have to balance between using all that torque and spinning the wheels. It’s tough. With the track conditions the way they are, you’re tiptoeing around and trying to control the raw horsepower, it’s a lot of fun!”

Andy Priaulx (2015 ROC Cup Nation Winner, 2004 ETCC Champion and 3 times WTCC Champion): “This car is amazing, the handling is fantastic. It’s probably my favorite car of the Race Of Champions! I love this car! That car’s meat! It’s big, it’s powerful and turns in really well so that was a really nice first race. I’m very happy to win because it’s our home race and I’m happy to go through.”

Pascal Wehrlein (2015 DTM Champion and AMG Mercedes F1 test driver): “It’s really nice! Last year I drove it for the first time the NASCAR Whelen Euro Series car in Barbados and I have to say it was a bit strange. The car was so big and if you come from single-seaters or DTM, you are used to a very responsive car and that’s a bit of the opposite. But now, in the stadium, it was completely different, maybe because it was wet. It was much more fun, you could play a lot with the car and you can drift a lot, but definitely it’s a huge car!”

The 2015 season of the NASCAR Whelen Euro Series will officially end on December 12 at the NASCAR Hall of Fame / Charlotte Convention Center with the NASCAR Night Of Champions Touring Awards, the ceremony that will reward 2015 Champions, Trophy winners and Cups winners at the end of a week of celebrations. 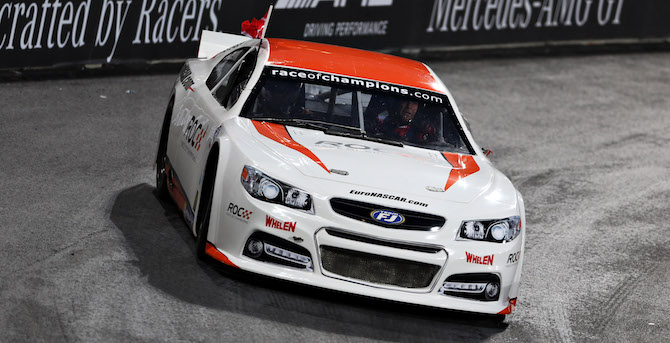