Scuderia Toro Rosso 2016 Engine Will Be Built by ScuderiaFerrari

Scuderia Toro Rosso 2016 engines will be supplied by Ferrari. This news broke at the same time Renault announced it’s purchase of the Lotus F1 Team. Infiniti Red Bull Racing has also announced that it’s 2016 F1 engine will be branded by TAG Heuer, the watch company.

Here is the news no one was expecting to hear: the Toro and the Cavallino are together again… what a stable!

Scuderia Toro Rosso’s 2016 challenger, the STR11, will feature a Ferrari power unit. It marks a return to the company that supplied engines to the team from 2007 to 2013.

Because of the last minute nature of the decision relating to our power unit supply for next year, the team will use the very last specification used in the 2015 season. With Scuderia Ferrari’s own cars finishing third and fourth in the final race of the year and second overall in the Constructors’ Championship, that is a positive situation in which to start Scuderia Toro Rosso’s eleventh year in Formula 1. 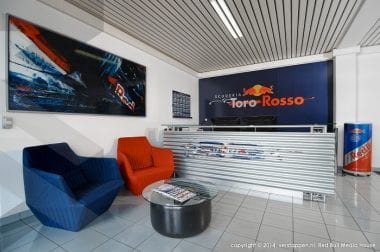 Logistically, with our engine supplier just a short drive up the Autostrada and even linguistically, the return to Ferrari will make for an easy working relationship. Taking this into account, and considering the past achievements with our friends from Maranello, we can certainly expect an improvement in our performance next year. We can also count on Carlos and Max who, after being confirmed for the 2016 season, will be able to translate all this year’s learnings and experience into additional valuable feedback throughout the season.

Franz Tost: “It’s great to be working with Ferrari again. We had a fruitful relationship in the past and I’m sure it won’t take long for us all to be working together very well again. It’s true that time will be very tight for us to be ready for the first test, but we have the right team of people for this and I’m confident that together we will achieve a competitive package for next year – bring on 2016!”.

Scuderia Toro Rosso would also like to take the opportunity to thank Renault for their efforts over the past two years.