Lucas Oil Speedway has released 2016 Show Me 100 details. The payout will increase $60,000 from the previous year.

The 24th annual Lucas Oil Show Me 100 Presented by ProtectTheHarvest.com at Lucas Oil Speedway is adding about $60,000 in total purse money for the three-night event, next May 26-28. A feature on the middle night is being added, meaning two $6,000-to-win preliminary events leading into the $30,000-to-win finale.

Those first two features have more meaning than money. Some details remain to be finalized, but the first 18 starters in the 100-lap Show-Me 100 will be determined by average finish from the Thursday and Friday features. Previously, those positions were set through time trials and heats on a feature-less Friday.

Lucas Oil Speedway General Manager Dan Robinson made the 2016 Show Me 100 details announcement at Thursday night’s Lucas Oil Late Model Dirt Series awards banquet in Carmel, Indiana. Robinson said total purse for the weekend, which is co-sanctioned by the Lucas Oil MLRA, will grow to about about $170,000.

Robinson said the evolution of the Show-Me 100, which included the addition of the popular “Cowboy Classic” on Thursday night in recent years, precipitated the changes. He said Friday’s action, which has consisted of Show-Me 100 time trials, heat races, Manufacturers Dash and Past Champions race – but no main event – left a void.

“I never dreamed Thursday would be so big, so I felt like we wanted to have two full shows leading into the Show-Me 100. I liked the idea of a feature both nights,” Robinson said. 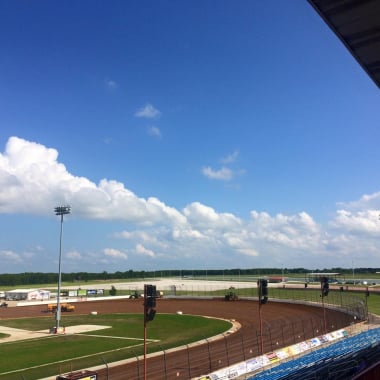 Robinson said the Thursday race will continue to be named in honor of Allen “Cowboy” Chancellor, former co-owner of the MLRA. The Friday feature will pay tribute to Don and Billie Gibson, former owners of West Plains Motor Speedway where the Show-Me 100 originated.

Up to three B features on Saturday, lined up by average finishes on Thursday and Friday, will determine the remainder of the starting field for the Show-Me 100.

“The Show-Me 100 has a rich history and ranks as one of the most prestigious events to win in dirt late-model racing,” Robinson said. “With the format improvements and purse increases throughout the field, simply making the race will be a huge achievement.”

Robinson – named Innovator of the Year in a presentation by FuelTix earlier this week at the Race Track Business Conference in Indianapolis – said entry fees and pit-pass prices will not increase and the first two nights.

Please visit www.LucasOilSpeedway.com for the most up to date information about “America’s New Motorsports Destination”, Lucas Oil Speedway.

Lucas Oil Speedway is located at Highways 83 and 54 in Wheatland, MO. A campground with shower and bathroom facilities is also available. With it’s entrance located just outside the pit gate this sprawling scenic camping facility will continue to enhance the racing experience at the Diamond of Dirt Tracks.

Click  www.LucasOilSpeedway.com for more information and detailed directions to the speedway or call the Track Hotline at (417) 282-5984.