2016 Change Racing Lamborghini drivers announced as Corey Lewis and Spencer Pumpelly. The two have joined the team as full-season drivers for the 2016 IMSA WeatherTech SportsCar Championship campaign. The American racers will co-drive the No. 16 Change Racing Lamborghini Huracán GT3 machine in the GTD Class, which will open the 11-round championship with the Rolex 24 At Daytona on January 30-31.

After generating three Lamborghini Blancpain Super Trofeo North America driver championships in the last three seasons, the 2016 effort marks the first year of IMSA WeatherTech competition for Change Racing. The 2016 GTD Class will feature full GT3 specifications for the first time and has attracted global interest as many anticipate the class to be one of the most competitive on offer.

“This is a big move for our team to be expanding into the IMSA GTD Class, and we are proud to have this roster in place for the season,” said team principal Robby Benton. “We know Corey (Lewis) very well and he makes a good case for moving up our internal ladder from the Lamborghini Super Trofeo program into the WeatherTech championship. And to have a proven winner like Spencer (Pumpelly), with his knowledge and experience join us, it makes for a very strong lineup for this team.”

With races that range from just under three to 24 hours long, the move to IMSA WeatherTech competition provides a significant step for the team as it prepares to build on several years of racing with Lamborghini with the new challenge. The 585-horsepower Huracán GT3 is the first GT3 car to be fully engineered, developed, and assembled internally by Automobili Lamborghini.

“We understand the challenge that lies ahead, there is a lot to adapt to and there is a lot to learn as a team, ” said Benton. “Having worked with Lamborghini Squadra Corse, having their support and knowing what their goals are, is a big reason for us to be making this move now with the new Huracán GT3. It is an incredible car and I look forward to being back on track with it for testing next week.”

Racing in the Pro-Am Class of Lamborghini Blancpain Super Trofeo competition, Lewis earned a World Championship with Change Racing in 2015, and is eager to continue his racing progression this season as he prepares for his GTD Class debut. 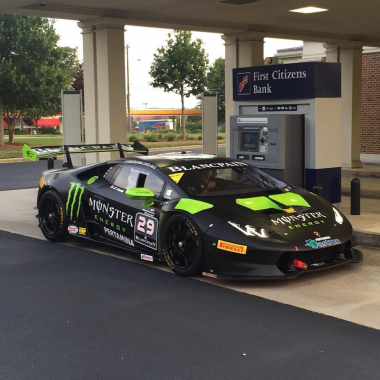 “To move up to IMSA WeatherTech and race a Lamborghini Huracán for Change Racing is an awesome opportunity,” said Lewis, who will once again be a Monster Energy Athlete in 2016. “Winning the World Championship with this team last season was a huge high point for me and my career, and to have that translate into this opportunity is just incredible. To have someone like Spencer (Pumpelly) as my co-driver is a big boost for this program. I am also excited to have Monster Energy Drink follow me through the ranks of sports car racing, it is truly an honor to be a part of such an iconic brand for the second year running! Being a part of the Lamborghini Squadra Corse family, marking their 100th year, will also bring attention to our team and series so I’m really looking forward to learning a lot this season and carrying the momentum built from last season into 2016!”

Pumpelly enters the 2016 season as the most-recent IMSA race winner, having won the season-finale Petit Le Mans in October. The two-time Rolex 24 Champion (2006, 2011) has experience in everything from NASCAR short track machines to Daytona Prototypes, but with 19 wins, the Virginia native is best known for his accomplishments in GT competition.

“I met with Robby (Benton, team principal) at the Lamborghini World Finals in November, and I really liked his organization and attention to detail, so I’m very happy that everything came together for me to join Change Racing,” said Pumpelly, who earned victories in World Challenge, Continental Tire SportsCar Challenge, and IMSA GTD competition in 2015. “With the driver aides and new aero package, there will be a lot to learn with the new GT3 cars, but the Lamborghini Huracán is really well thought out and already has a very good reputation for finishing races well in Europe.”

Change Racing will continue to compete in Super Trofeo in 2016 as the organization grows its competitive footprint with Lamborghini. The team will make announcements about the 2016 program in the New Year.