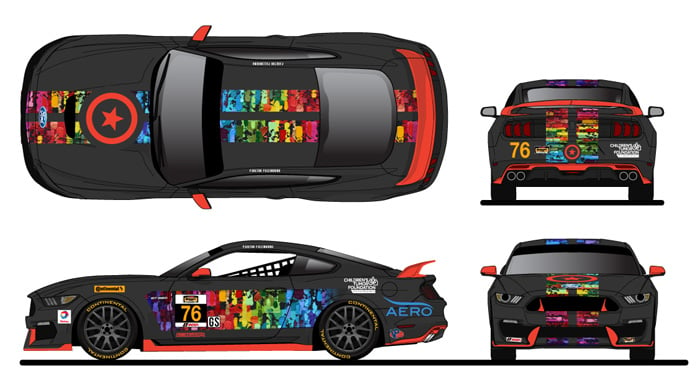 2016 Compass360 Racing Ford Mustang livery released. C360R today released details of its much-anticipated return to the Continental Tire Sportscar Challenge GS-class. The squad will be the first customer team to compete with Ford’s new Mustang GT350R-C, and will field a full-season entry for drivers Paul Holton and Pierre Kleinubing.

“We’re honoured to have been selected by the folks at Ford to be the first team to run the new Mustang, and are looking forward to working closely with Multimatic in continuing to develop the platform,” remarked Team Principal Karl Thomson.

The announcement marks the return of both drivers to the squad. Holton impressed at the helm of one of the team’s Audi S3’s last year — his rookie season in CTSC — taking a dramatic win with co-driver Kyle Gimple in the season finale at Road Atlanta, having led the race for most of his stint. Kleinubing, meanwhile, is back for his third season with C360R, having taken two podiums in the squad’s GS-class Subaru with Ray Mason before leading the team’s GTD Audi R8 effort in 2015.

“This is an exciting program, and we know we’ve got a great driving line-up in a great car,” said Technical Director Ray Lee. “We’re expecting to be competitive right out of the box and run for the GS championship.” He continued, “it’ll be a big change in GS, going from a high-strung four-cylinder turbocharged Subaru to a big, thundering V8 in the Ford, and we’re up for the challenge.”

“I learned so much driving the C360R Audis last year, and am excited to be part of this new Mustang effort,” enthused Holton. “Our goal is to bring Ford a Manufacturer’s Championship in 2016.”

The No. 76 Mustang GT350R-C will continue the team’s ongoing support of the Children’s Tumor Foundation, and will wear a unique livery featuring a new painting by NF Hero and philanthropic artist Jeffery Owen Hanson, applied with unique AERO Advanced Paint Technology. “The Foundation is so grateful to our partner teams in the IMSA paddock,” noted CTF’s Racing4Research Program Director, Jill Beck. “Paul, Pierre and all the C360R drivers and crew are always so wonderful with the CTF kids, and we’re thankful to have the opportunity to extend our Art Car program with them for another year.”

The Ford program joins the team’s already-announced two-car ST-class Audi S3 program, and finalizes the C360R IMSA effort for 2016. The team will be at Daytona International Speedway for the ROAR, January 8-10 in preparation for the season opener, also at Daytona Jan 27-29.