“I was checked out?” he asked a crew member prior to the Victory Lane celebration at the offseason’s premier 410ci winged sprint car event in the United States.

Larson, who was driving for Paul Silva, lapped up to 14thplace and he won by more than five seconds on the semi-banked, 3/8-mile oval to score the $12,000 winner’s share. It also made him the first repeat winner during seven Winter Heat Sprint Car Showdown main events.

“I had a lot of fun,” he said. “You had to be really aggressive, but then you also had to be careful, too. To run the top you had to be aggressive, keep your wheel spin up so you wouldn’t get sucked into the cushion like I did a couple of times. It was a tricky race track. It made it a lot of fun.”

Larson, who started the 30-lap feature on the outside of the front row, inherited the lead when polesitter Greg Hodnett spun in turn two on Lap 8. From that point the race was all Larson, who pulled away from the field following restarts on Lap 9 and Lap 11 en route to the triumph.

“The cushion got bigger and bigger throughout the race and got trickier to run and (I) kind of had to run off of it a little bit when I caught traffic,” he said. “I made a lot of mistakes actually, but I think I had a big enough lead I could stay somewhat comfortable.” 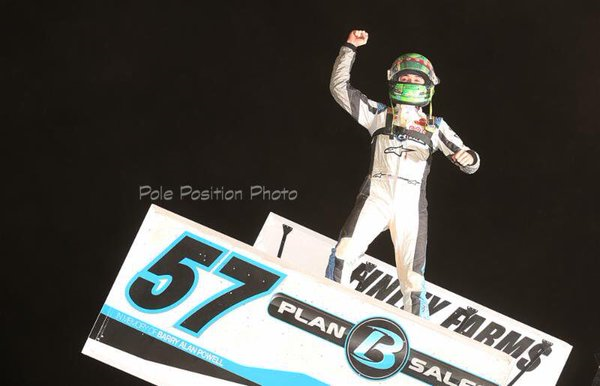 Shane Stewart, who pilots a sprint car for Larson with the World of Outlaws Sprint Car Series, advanced from sixth to second place in his Larson-Marks Racing entry.

“Obviously a great night for LMR,” he said. “It was really cool to see Kyle come out here and race. The kid is just really, really good. Every time he jumps into a sprint car he proves it. He just makes it look so easy. This was his type of track, slick to a big curb.

“I needed to be a little tighter. We got a little free there toward the end. I had to be really cautious when I got to lapped traffic. At one point I actually thought I could see him, but, hell, it was another white car. He checked out on me pretty good.”

Danny Lasoski, who is the defending champion of the event, used a late rally by running in the middle of the track to round out the podium after he dropped outside the top 10 in the early laps.

“You have to go as fast the last 10 (laps) as you do the first 20,” he said. “When you’re racing this kind of race track you have to go where they’re not. Our car seemed to work pretty good in the middle as long as I two-footed it.”

General admission tickets for the event are on sale by visiting http://www.CocopahWinterHeat.com. Kids 12 and under get in free. There is a discount for military members and senior citizens.

Speed Shift TV will be broadcasting live Pay-Per-View video of the 2nd annual Winter Heat Sprint Car Showdown for only $24.95 per night. Also, a 20-percent discount is available for those who purchase all five nights. Visithttp://www.SpeedShiftTV.com/WinterHeat for more information.

The 2nd annual Winter Heat Sprint Car Showdown will showcase the top sprint car drivers in the world in sunny Southwest Arizona during the first two weeks of January in 2016. The four weekend races pay $12,000 to the winner and at least $1,000 to every driver who advances to the main event with the midweek show paying $5,000 to win.

The 2nd annual Winter Heat Sprint Car Showdown features a $10,000 points fund thanks to Cometic Gasket, JE Pistons and K1 Technologies. The driver who garners the most overall points throughout all five races receives $4,000 for winning the championship with drivers finishing second through fifth each recording a $1,500 bonus.

Cocopah Speedway is a semi-banked, 3/8-mile dirt track located in Somerton, Ariz. It has a concrete wall perimeter, television-quality lighting and the pits are located outside turns three and four. There is also dry camping free of charge on the property. For more information, visit http://www.CocopahSpeedway.com.

Cometic Gasket, Inc., is a leading worldwide supplier of gaskets and engine sealing solutions for the Automotive Performance, Powersports, Original Equipment and Remanufactured Engine Industries. Housed in a 70,000 square-foot, state-of-the-art R&D and manufacturing center in Concord, Ohio, Cometic Gasket has maintained its deep roots in the powersports industry while expanding to service the Automotive Performance, Domestic Automotive, Sport Compact, V-twin, Marine, Diesel, Agricultural, Industrial and Stationary Power markets. Today, Cometic Gasket offers over 85,000 SKUs, shipping gaskets and engine sealing solutions across the globe. All Cometic products are made in the United States with materials manufactured on American soil. For more information, visithttp://www.Cometic.com.

JE Pistons is the leader in high performance forged pistons. Based in Irvine, Calif., the company has more than 60 years of experience and has a history of manufacturing the highest quality pistons and components that professional engine builders, race teams and high-performance enthusiasts trust and rely on. For more information, visithttp://www.JEPistons.com.

K1 Technologies produces “RACEREADY” connecting rods and crankshafts at very affordable prices. K1’s connecting rods and crankshafts are made to our designs and are held to some of the tightest accepted tolerances in the racing industry. More attention is shown to finish work than comparable products. A wide variety of sizes and applications are available, from Sport Compact sizes through Small Block and Big Block Chevy and Mopar, including some custom and specialty sizes. Our unique design, which is original to the K1 Technologies line of connecting rods, saves weight without sacrificing strength. K1 Technologies strives to bring our customers a high-quality connecting rod at an affordable price, while providing world-class customer service. For more information, visithttp://www.K1Technologies.com.

Kyle Larson discusses the battle with Kyle Busch at Chicagoland

Kyle Larson will not be at the Knoxville Nationals tonight