The Craftsman® Brand Returns to Motorsports as Title Sponsor of the World of Outlaws Craftsman Series in both sprint cars and dirt late models.

HOFFMAN ESTATES, Ill. – Feb. 1, 2016 – Sears® and the Craftsman® brand, America’s most trusted tool brand, announced today the return of Craftsman tools as a major presence in motorsports, becoming the title sponsor of the World of Outlaws®.

“The Craftsman brand has been trusted for generations by those who take pride in working on their car,” said Tom Park, president of Kenmore, Craftsman and DieHard brands at Sears Holdings. “Our Craftsman Club members are passionate about building, improving and even racing their own cars. That’s why we’re excited for the Craftsman brand and Sears to team up with the World of Outlaws, which has over one million fans who are working on their cars every week and reaches tens of thousands of racers who are competing at dirt tracks across the country. These individuals exemplify what it means to be a craftsman and we are honored to be part of their lives as the title sponsor of the World of Outlaws.” 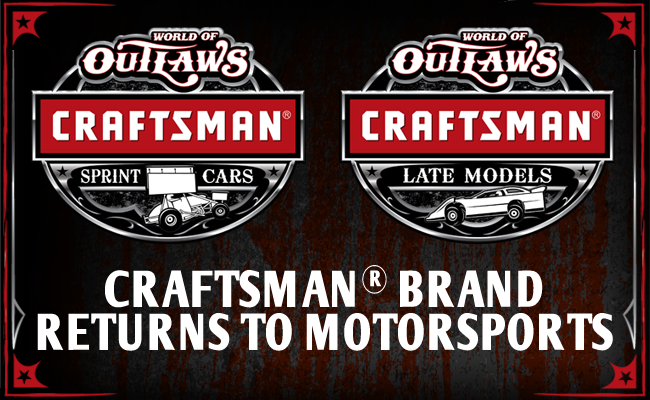 “Sears offers a true one stop shop for World of Outlaws racers, fans and auto enthusiasts all over the country to unleash the potential of their own cars,” said Dean Schwartz, vice president of tools, lawn and garden at Sears Holdings. “That’s because Sears offers an unsurpassed selection of accessible, quality mechanics tools and storage, and the Craftsman brand delivers innovative products like our new Extreme Grip Series of hand tools. With their know-how and Craftsman tools, local racers may even compete against the best dirt track drivers in the country when the World of Outlaws comes to town. Craftsman hand tools at Sears are guaranteed to perform with our full lifetime warranty on hand tools or we’ll replace them.”

Through its relationship with the World of Outlaws, the Craftsman brand will celebrate the 25th Anniversary of the Craftsman Club by giving its members the chance to earn free tickets to series events, as well as Craftsman gear and other great prizes.

The relationship with the Craftsman brand is a first-of-its-kind arrangement for the World of Outlaws. The deal is one of the largest agreements in grassroots racing and connects the Craftsman brand with both sprint car and late model fans at nearly 140 events across the United States and Canada.

Founded in 1978, the World of Outlaws Craftsman Sprint Car Series enters 2016 with one of the busiest schedules ever which kicks off during DIRTcar Nationals at Volusia Speedway Park in Barberville, Fla. The series will travel coast-to-coast to more than 90 events. The World of Outlaws Craftsman Late Model Series competes nearly 50 times at 30 different venues including the season opener at Screven Motor Speedway in Sylvania, Ga.

Sears Holdings Corporation (NASDAQ: SHLD) is a leading integrated retailer focused on seamlessly connecting the digital and physical shopping experiences to serve our members – wherever, whenever and however they want to shop. Sears Holdings is home to Shop Your Way®, a social shopping platform offering members rewards for shopping at Sears and Kmart as well as with other retail partners across categories important to them. The company operates through its subsidiaries, including Sears, Roebuck and Co. and Kmart Corporation, with full-line and specialty retail stores across the United States. For more information, visit www.searsholdings.com .

About World of Outlaws