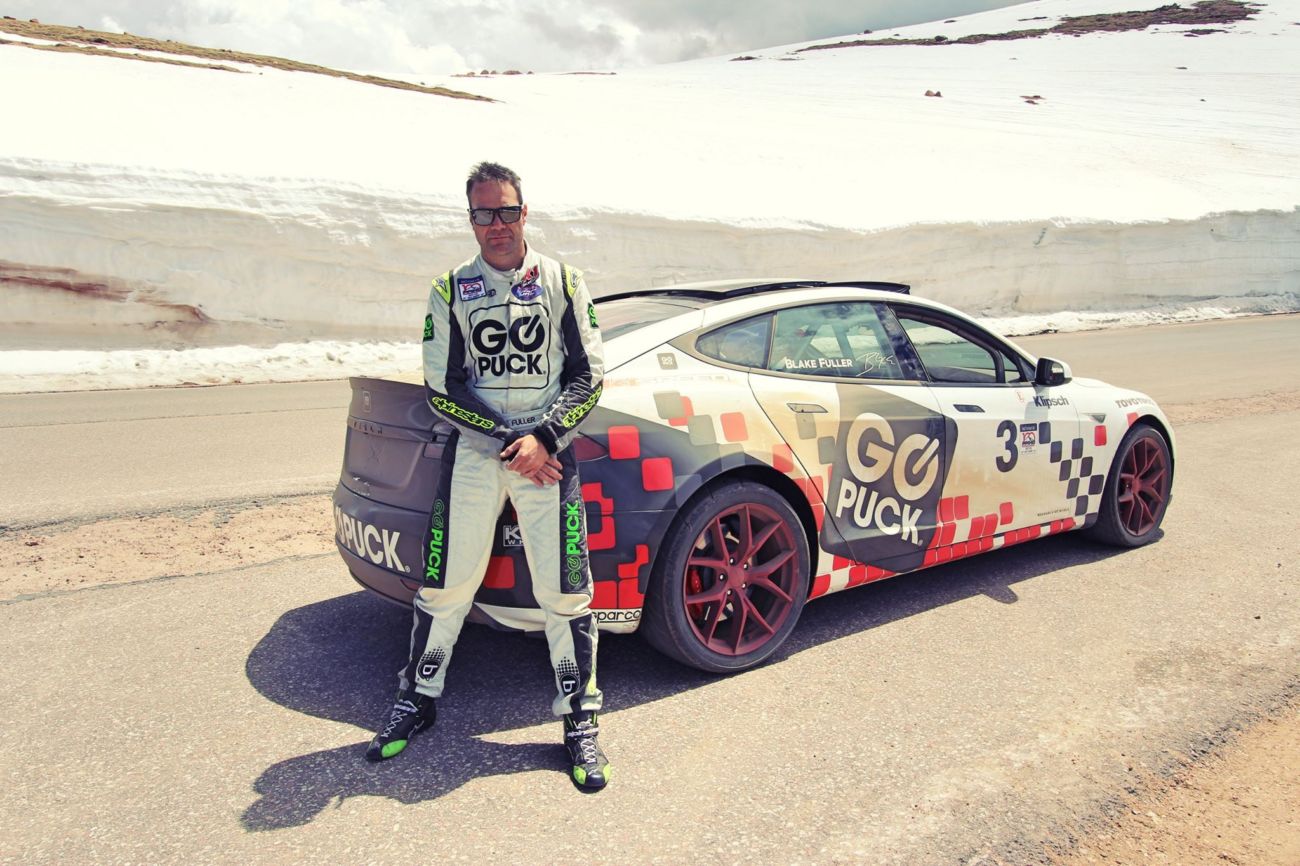 View the specs and photo gallery of the Tesla Model S Racecar below. The car is set to be driven by Blake Fuller in the 2016 Pikes Peak International Hill Climb.

This year marks the 100th anniversary of one of the world’s most dangerous car races, the Pikes Peak International Hill Climb (PPIHC). Although it’s length is only 12.42 miles, the course has 156 turns and begins at 9,390 feet and finishes at the mountain’s summit 14,115 foot up. The beautiful Colorado Springs, CO location attracts thousands of spectators and top drivers around the world.

The CEO and Founder of GO PUCK, Blake Fuller, is one of those drivers that will compete to be king of the mountain. Entered into the Electric Productions class, he will be driving a Model S Tesla—the first time the World’s best selling electric car will make a PPIHC appearance.

Blake Fuller is no stranger to victory in top-level racing competition. Fuller earned Rookie of the Year honors in 1999 at the PPIHC and won the prestigious Open Class in 2002 along with numerous podiums finishes in all levels of professional motorsports since.

GO PUCK and Fuller’s goal is to break the current electric car record of 13 minutes. To achieve this record the car has been lightened by almost 800 pounds prior to safety equipment being installed and boasts over 750 HP. Partner companies include Toyo Tires, SPARCO, Wheel Pros, Klipsch Audio, T Sportline and Wearable IOT World. Full details of final race spec will be released on or about their first testing dates at Pikes Peak June 4/5th. The car has already seen testing at Sonoma Raceway and private tests in the forests of Northern California.

Fuller’s status as a revolutionary in the battery industry makes him an indispensable part of motorsports behind the scenes. In 2001, Fuller developed a new battery for his 2002 race winning hill climb vehicle that was 80% lighter than the car’s original battery. In the decade since, “Batteries by Blake” have powered championship winning vehicles, including NASCAR, F1 and every IndyCar!

Around 2012, he transferred his experience of designing durable, lightweight motorsports power to a more consumer electronics application. GO PUCK was born. Focused on being the world’s most versatile battery, GO PUCK’s Wearable Power serves the power needs of the 8+ Billion mobiles devices on the market. Now, the GO PUCK Tesla Model S serves as the vehicle (pun intended) to demonstrate the performance abilities of this Lithium Ion technology.

“To return to Pikes Peak for the 100th Anniversary as an invited competitor is an honor.” Fuller continues: “To be able to compete in the 1st Model S to do so makes this year even more special. We have been wanting to see a Model S compete Pikes Peak. Our team kept waiting for someone to do it, and now we don’t have to wait any longer! We hope to bring what is ultimately the World’s 1st Model S race car to the mountain to establish just how far racing has progressed with production based vehicles in the last 100 years of racing. It is a test of both the progression of man and machine which is so exciting for me to be a part of this historic event!”


Final Spec to be released later