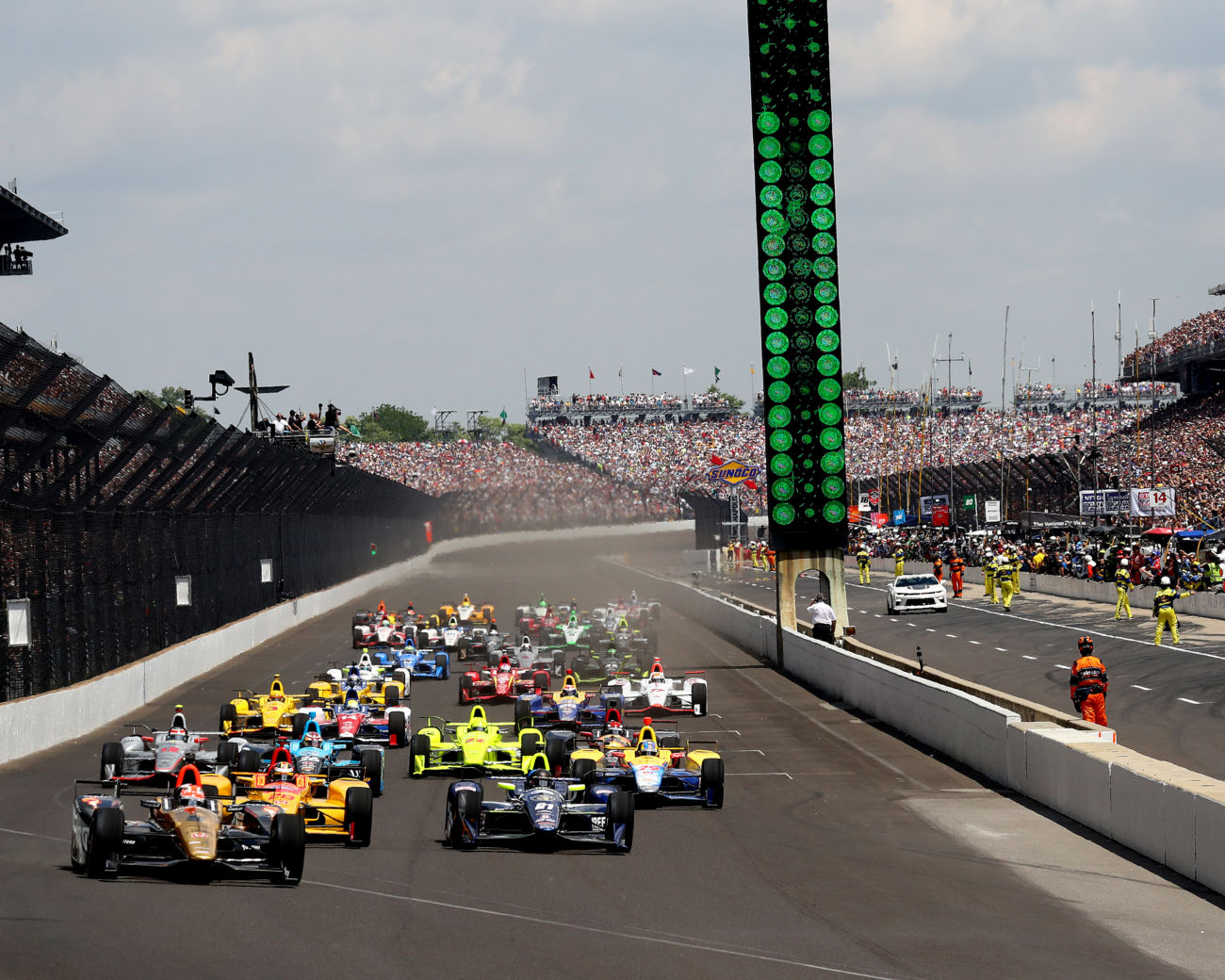 See the full 2016 Indy 500 results sheet posted below the article.

INDIANAPOLIS – When Alexander Rossi leaves Indianapolis, don’t be surprised if he’ll have a song stuck in his heart and head: fellow Californian Jackson Browne’s 1977 hit, “Running on Empty.”

Rossi was running on an empty fuel tank in his No. 98 NAPA Auto Parts/Curb Honda, but managed to coast the final quarter-lap to win the history-making 100th Running of the Indianapolis 500 presented by PennGrade Motor Oil.

“This is the greatest day of my life,” Rossi said. “I have no idea how we pulled that off.

“I didn’t know (if I could make it to the finish). … I’ll cherish the fact that at one point we were (in 29th place) and that we rolled the dice and we came through and we made it happen. It’s phenomenal. I’m at a loss for words but it will change my life, for sure.”

The 25-year-old Auburn, California, native – who drove five races in Formula One last year before jumping back to American soil to compete in the Verizon IndyCar Series for 2016 – becomes the first rookie to win the Indy 500 since Helio Castroneves in 2001.

Rossi’s car started sputtering shortly after he took the white flag for the final lap. By the time he exited Turn 4 and headed to the finish line, he was coasting.

How slow? Rossi’s final lap speed was just 179.784 mph. But he had built such a huge lead that he still managed to cross the start-finish line with a 4.4975-second margin of victory.

By comparison, the last-lap speed of runner-up and teammate Carlos Munoz was 218.789 mph.

In his first season in the Verizon IndyCar Series, this was just Rossi’s sixth race. His best finish to date was 10th two weeks ago in the Angie’s List Grand Prix of Indianapolis, on the Indianapolis Motor Speedway road course.

“Unbelievable, unbelievable,” said Michael Andretti, co-owner of the Andretti Herta Autosport with Curb-Agajanian entry for Rossi. “They did a great job with their strategy. To get a 1-2 finish in the 100th Running of the Indy 500 (is) pretty good. We’re just so happy. It’s so awesome.

“It’s a great day to be part of history,” Andretti said later in the post-race press conference. “I’m a bit speechless. (Rossi) had never seen this place until a couple months ago. He was never intimidated and learned every day of the month.

“I saw he was very confident going into the race and he did a hell of a job. Even when there were problems, he kept his head in the game.”

When several other drivers including pole sitter James Hinchcliffe, Tony Kanaan, Josef Newgarden and Munoz had to stop for fuel in the closing laps, Rossi took the point on Lap 197.

That’s when co-owner and race strategist Bryan Herta told Rossi to conserve fuel, gambling Rossi could go a seemingly impossible 36 laps (90 miles) on the 18.5 gallons of Sunoco E85R fuel he had to make it to the end.

“Bryan came up with an unbelievable strategy.” Rossi said. “The NAPA Auto Parts/Curb Honda was fast in the beginning. I can’t believe we’ve done this.”

For Herta, it was his second Indy 500 win as a team owner. The late Dan Wheldon won the 2011 500 for Herta’s team, which joined forces in mid-February with Andretti.

“This is unbelievable,” Herta said. “Man, it was so close at the end. For a rookie to drive with the poise he did in such a tough situation – I was telling him, ‘Don’t let anybody pass you but save fuel’ – and he did it. A tribute to Alex, Michael Andretti and the whole team. We worked so well together this month.”

A sellout crowd filled Indianapolis Motor Speedway for the momentous race – and were not disappointed.

“It sucks not winning this thing, but at least people had an amazing show to watch for the 100th running,” Newgarden said after finishing third in the No. 21 Preferred Freezer Chevrolet for Ed Carpenter Racing. “That’s all we can really ask.”

Tony Kanaan was fourth in the No. 10 NTT Data Chevy for Chip Ganassi Racing, with teammate Charlie Kimball fifth in the No. 42 Tresiba Chevy.

Pagenaud’s teammate, defending Indianapolis 500 winner Juan Pablo Montoya, saw his day end early when he lost control of the No. 2 Verizon Team Penske Chevrolet and hit the SAFER Barrier exiting Turn 2 on Lap 64 in a single-car incident. Montoya became the third champion to finish last the following year, after Jimmy Bryan in 1959 and Johnny Rutherford in 1977.