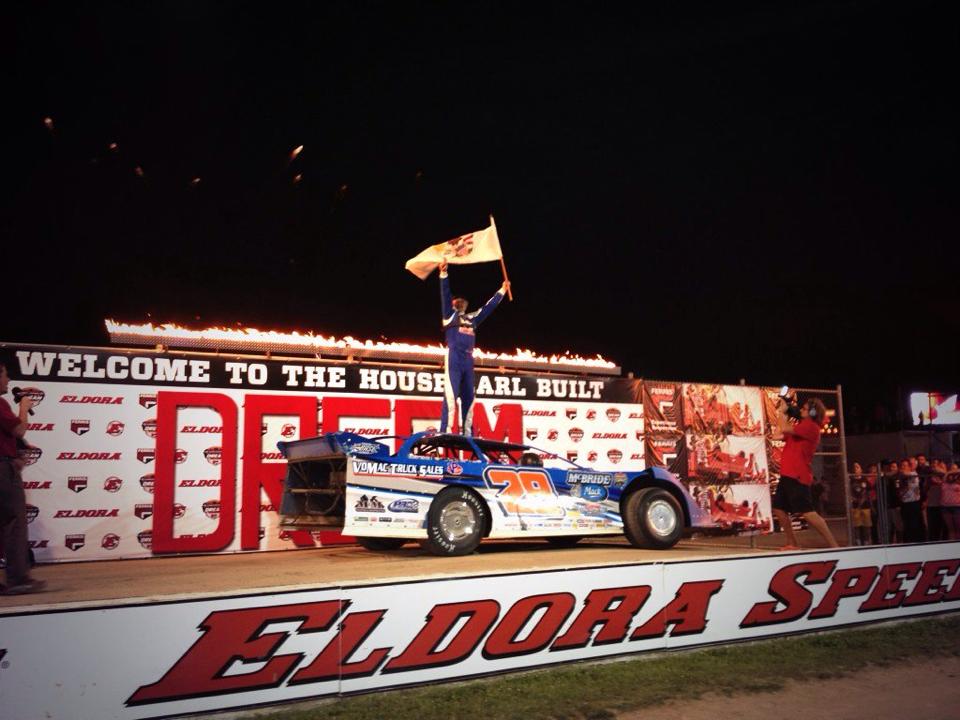 The 43-year-old driver regained the lead for the final time with 11 laps remaining and survived a last-second yellow flag at Eldora Speedway for a career-high $100,000 victory in the Dirt Late Model Dream presented by Ferris Mowers.

Erb’s victory was the first crown jewel triumph of his career and gave Illinois its first major-race Dirt Late Model victory in history at Eldora, the historic Tony Stewart-owned oval that hosts the sport’s richest events.

“It’s been a long time,” Erb said in victory lane after waving an Illinois state flag while standing atop his familiar blue No. 28. “All’s I’ve got to say is, ‘How ‘bout that Illinois?’ ”

The outside front-row starter led the first three laps, but three times he fell from the lead and fought his way back, the final time in overtaking Josh Richards on the 90th lap and pulling away. Victory was in hand on lap 99, but a Richards-Jared Landers tangle exiting turn two drew the last of eight caution flags, setting up a green-white-checkered finish with Richards and charging Georgians Jonathan Davenport and Dale McDowell hot on Erb’s heels.

“My heart dropped coming to that checkered flag coming out of that corner. I didn’t know what was going to happen after that,” Erb said. “When you get out there and start getting in a rhythm and the car’s good … they got away from me and I started catching them. I just wanted to keep hitting my marks. I just knew we had a good car. Just fortunate there. We made the right decision and picked the right line at the end. We just got it done tonight.”

Erb hugged long-time crew chief Heather Lyne in victory lane and didn’t forget his late father, a former Illinois racer who would’ve been so proud of his son’s biggest victory.

“I was just worried about getting to that checkered flag. That last caution there, I was kind of worried about that. I just knew I had a good car. I just prayed and told my dad, ‘Let’s go and let’s get this done.’ ”

Erb took the checkers 1.120 seconds ahead of Richards, the Shinnston, W.Va., driver who led a race-high 41 laps. The 17th-starting McDowell, the 2014 Dirt Late Model Dream winner from Chickamauga, Ga., was third while last year’s Dirt Late Model Dream winner Jonathan Davenport of Blairsville, Ga., who pitted to change a tire on lap 43, charged back to fourth. Don O’Neal of Martinsville, Ind., improved 16 positions to round out the top five.

Richards, like Erb looking for his first Eldora victory, rode the high groove all race long but couldn’t hang on in the race’s late stages.

“I had a blast out there. Congrats to Dennis and those guys. The best car won the race and he did a great job,” the Rocket Chassis house car driver said. “I was trying to do what I could, I was just a little too free to move to the bottom. I really don’t know what Landers was trying to do there, I guess he gave me another shot at the $100,000. We’ll take it, we just have to work a little harder next time.”

“I knew it was going to be a long shot. We had a lot of damage. The left front corner was dragging the ground and I spun the tires on the start because the nose was dragging. I thought we might have a little bit of a shot there, I just needed another car length or two to get a run down into three. But what can I say? We’re a lot closer than what we were.”

McDowell wonder if he might have a shot at his second Dirt Late Model Dream after the late caution.

“I didn’t know what was going to happen there at the last,” he said. “ I thought I might win from third. It didn’t happen. We’ll take it and come back for the World.

“It’s unfortunate, those double-file restarts right there with one lap, or two laps to go. It gets a little hairy. But it was fun. This tire management, as you go through the race, the racetrack changes complexion three or four different times. We’d fade and we’d go, we’d fade and we’d go, and I watched those guys do the same thing. I need to be a little bit better. We’re going to go to work on it and see if we can do better next time.”

Landers began stretching his lead while ninth-starting Tim McCreadie moved into second with Erb, Steve Casebolt and Marlar in pursuit as Davenport fell from the top five.

On a lap-eight restart, McCreadie used the high groove to nose into the lead ahead of Landers with 25th-starting Shannon Babb charging into the top 10.

A revived Erb moved back into second on lap 10 and began pressuring McCreadie while Landers, Richards and Casebolt gave chase.

The frontrunners spread out before entering slower traffic on lap 20 as Erb turned up the heat on McCreadie with Landers in third, Richards fourth and Davenport rolling again after returning to the top five two laps earlier.

On a lap-27 restart, Richards blasted off turn two to come alive in third while the leading McCreadie had his hands full with Erb. Richards briefly fell back after getting into the backstretch wall as Erb used the high side to regain command from McCreadie on lap 31.

A lap-34 restart kept Erb up front with Richards challenging on the high side as McCreadie slipped back to third. Richards dove under Erb in turn one to take command on lap 36 with Erb, McCreadie, Landers and Davenport trying to keep up.

With clear track on a lap-38 restart, Richards continued rolling in the high side as 17th-starting Dale McDowell moved into fourth behind Richards, Erb and Davenport as McCreadie slipped back to fifth.

Davenport rolled to a stop on the frontstretch on lap 43 to draw a yellow and as the field slowed, the fourth-running McCreadie’s car showed significant right-side damage that forced him to the pits at the officials’ behest to remove dangling bodywork.

The Richards-Erb battle, stymied by a series of cautions, resumed before the halfway point as they pulled away from McDowell, O’Neal and Thornton as McCreadie went a lap down.

Richards kept rolling in the high side to lead at halfway while Erb, running the middle, stayed within striking distance as Davenport moved back into the top 10 after his pit stop.

Richards and Erb ran virtually side-by-side for several laps after halfway, and Erb snuck back past to lead on lap 57 with tail-starting Chris Simpson moving into the top five.

Davenport continued his rally by taking fourth from O’Neal on lap 65, but he was a full half-track margin behind Erb, who cruised out front, unhampered by traffic.

But debris in turn one brought out a lap-69 yellow and erased Erb’s substantial margin, putting the rallying Davenport in position to contend for the first time since he slowed and pitted on lap 43.

Erb turned up the wick and pulled back even with Davenport in a battle for second as they stayed within striking distance with the leading Richards.

The top three continued to pull away with 20 laps remaining as Richards and Davenport stayed in the high side and Erb continued to hang tough in the middle groove. Richards began to inch away, leading by 1.117 seconds at lap 85 entering the event’s waning laps.

Erb regained second on lap 88 and quickly began another assault on Richards as Davenport tried to keep up.

Erb blew back past Richards exiting turn four on lap 90 and had clear racetrack as Richards fell back and Davenport pounded the turn-one wall on lap 92, damaging the right-rear corner of his No. 6.

It appeared Erb had it wrapped up on the white-flag lap when a Richards-Landers tangle exiting turn two brought out a final caution on lap 99. Erb, who had fallen back on other restarts, chose the high line and kept everyone in check on the two-lap shootout to the checkers.

The feature was slowed by eight cautions and a red flag that appeared on a lap-38 restart when Jeep Van Wormer, Tim Manville, Darrell Lanigan and Bobby Pierce were part of scramble against the outside concrete wall in turn one.

Overall fast qualifier Brian Shirley slowed on the ninth lap to draw the first yellow and, on the restart, a backstretch scramble sent heat winner Jon Henry and Chris Brown to the pits with body damage.

A lap-27 caution appeared when Bobby Pierce slowed on the frontstretch and Devin Moran got caught up behind him. Debris brought out a lap-34 yellow and Mike Marlar slowed for another yellow four laps later. The final caution on lap 69 also came out for debris.

One of the biggest crowd reactions of the three-day weekend came before the green flag flew for the 100-lapper.

Six-time Dirt Late Model Dream winner Scott Bloomquist of Mooresburg, Tenn., was leading a consolation race early, but he faded in the closing laps, losing spots to Jimmy Mars and Chris Simpson to finish fifth in a race where four drivers transferred.

After the cheering and jeering fans quieted, Bloomquist ran the post-consolation scramble then quickly ducked into his hauler to end a weekend that started out with him missing Thursday’s preliminary feature.