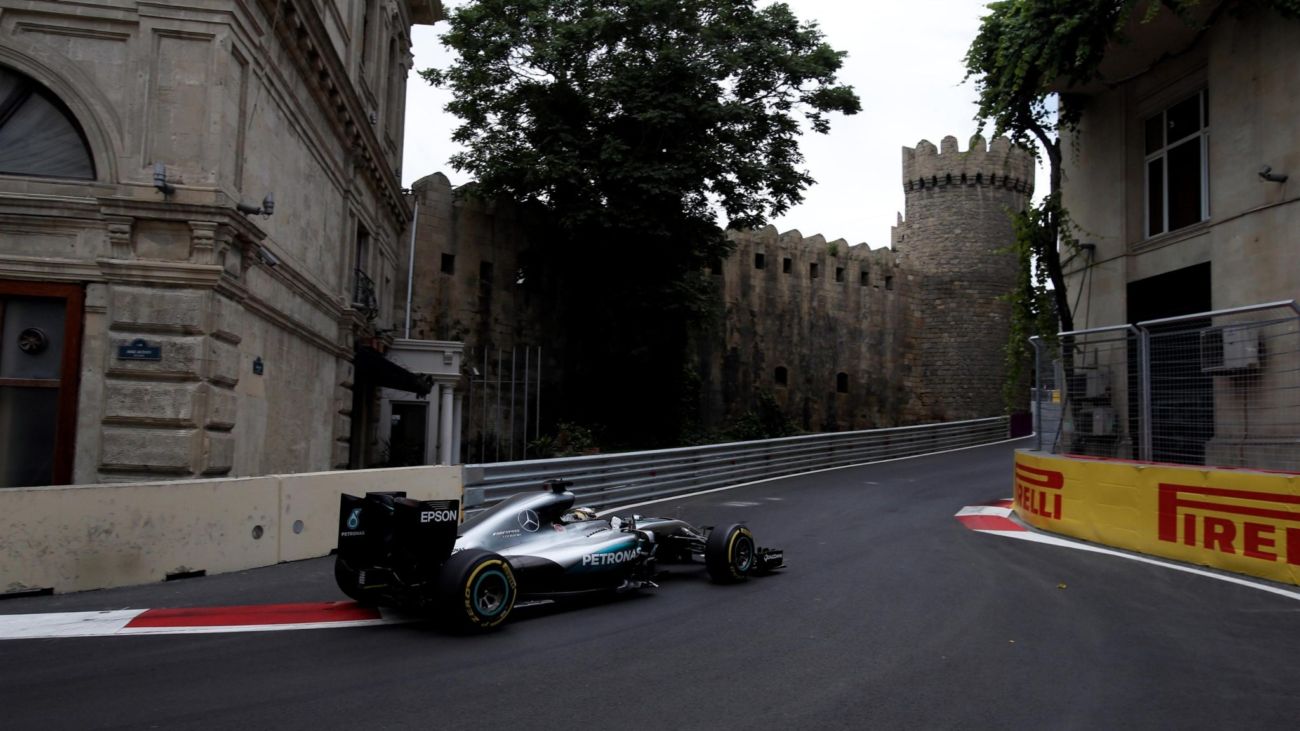 Check out the F1 Baku City photos posted below from Friday’s action. Lewis Hamilton and Nico Rosberg top FP1 for the Grand Prix of Europe.

“I think it looks exciting,” said Ferrari’s Sebastian Vettel, after walking the track. “I’m thrilled to get in the car and excited to get out and get a feel. [The] pit entry looks a challenge – but then again I think that’s why we’re here. And I certainly have the plan to stay on track and not use the run-off or the off-track.”

World champion Lewis Hamilton, meanwhile, didn’t bother with a track walk, having said he learns as much about circuits from computer games as he does from simulators – and he has done only eight laps of Baku in Mercedes’ facility.

He did say that he’s excited about the prospect of finding out about it in his Mercedes F1 W07 Hybrid rather than by walking it or cycling round, and that he has not walked an F1 circuit for several years.

“I’ve walked around circuits from Formula Renault to probably my third or fourth year in F1. It makes zero difference to my weekend performance. I’ve not walked a track since 2010, and it makes zero difference. Walking or riding around the track you might see a kerb, but it looks a lot different when you’re driving around it. It might work for others, but for me it doesn’t.

“I’ll go around [in practice], and that first lap is like you’re taking pictures with your mind, and you’re learning as you go around.”

McLaren’s Fernando Alonso, who is admittedly an ambassador for Baku, was the most positive driver, even though he admitted his own Honda-powered car may struggle with the circuit characteristics.

“I think the job they have done is fantastic. Everything is ready. Also the fans are well into F1 and they are very prepared, very enthusiastic for the race on Sunday and everything is ready for a good show.

“There are a few things that we need to discover in the car. Obviously walking is always different, in the simulator it’s different, so let’s see. Turns 8, 9 and 10, the narrow section on the uphill, will be quite interesting to drive and see how we can maximise the car limits there.

“The very unique theme on this circuit is probably the straight-line speed, which will be very high, and to be on a street circuit those kind of speeds will be quite unique. We need to check if it’s really flat out from Turn 16 to Turn 1 or if Turn 19 and 20 you need to make a lift there.

“Anyway, it’s quite interesting and will be for some teams a little bit more painful, probably for us, in terms of the distance on the straight. I should have made some modifications when I came here in March to make it a little bit slower! But that’s the way it is and we will see.”

Operating a dirt track in a city – Well populated city

NEXT POST
Felipe Massa Retiring from F1 after 14 Years