Tharp, a native of Louisville, Kentucky, transitions from his previous role as Senior Director of Communications for NASCAR. He replaces Chip Wile, who was appointed president of Daytona International Speedway on April 25 after a tenure of nearly three years.

Tharp has deep ties to the Palmetto State, having lived in South Carolina for more than 31 years and serving as associate athletics director at the University of South Carolina from 1985-2005.

After his time with the Gamecocks, Tharp joined NASCAR’s communications department, forging important relationships within the industry in both his official role as senior director and his unofficial role as NASCAR’s “Commander.” 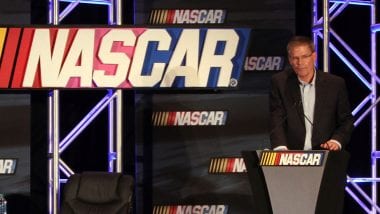 “I am deeply humbled and honored to have this opportunity,” Tharp said. “I love the state of South Carolina and its people. I know how special Darlington Raceway is to this state and to the sport of NASCAR. The track’s rich tradition, history, and popularity resonate with the competitors, partners, media and most importantly the fans. I look forward to working with our team to help keep Darlington as one of our sport’s crown jewels.”

Darlington Raceway plays host to the Bojangles’ Southern 500 on Sept. 4, a Labor Day weekend tradition that was restored on the NASCAR scheduled last season.

The track instituted a popular NASCAR Throwback initiative last year, kicking off a nostalgia-filled celebration of the speedway’s heritage. In acknowledgement, Darlington was honored with the 2015 NMPA Myers Brothers Award for its outstanding contributions to the sport of stock-car racing.

NEXT POST
Bristol Low Groove Returns – Old Bristol is Back!