And that was the difference in Truex’s unexpected victory in Sunday night’s Bojangles’ Southern 500 at Darlington Raceway.

Harvick led a race-high 214 laps, bringing his career total to 10,068. But where Truex’s much-maligned pit crew performed its finest stop when it counted most — under caution on Lap 351 — Harvick’s crew experienced the sorts of problems that have become chronic this season.

Where Truex’s over-the-wall gang got the No. 78 Furniture Row Racing Toyota off pit road with the lead for a restart on Lap 356, Harvick’s crew lost a net of 17 spots in the pits over the course of the race.

The bottom line? Truex, who has had the fastest car in a succession of races this year, didn’t have the most potent equipment on Sunday. Harvick did.

But it was Truex who celebrated in Victory Lane, after beating Harvick to the finish line by .606 seconds, leaving the driver of the No. 4 Stewart-Haas Racing Chevrolet to bemoan his 17th second-place finish in the past 61 races — many of which he could have won with flawless execution on pit road. 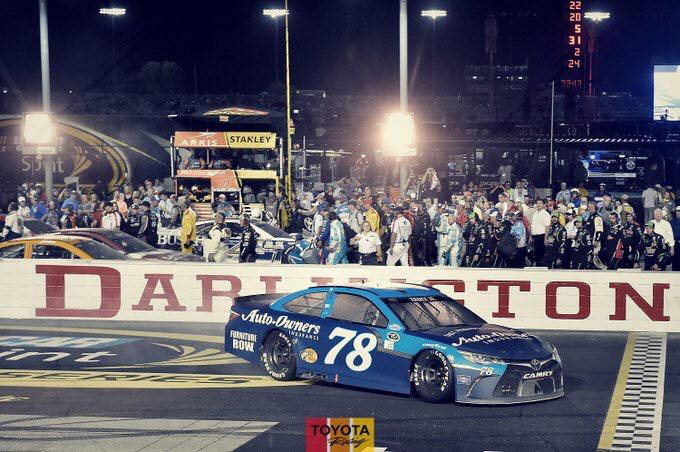 “This is unbelievable,” said Truex, who earned his second NASCAR Sprint Cup Series victory of the season and the fifth of his career. “I’ve always loved this race track. I’ve led a lot of laps here in my career, but something always happens, and I’m so proud to get to Victory lane with this group. The pit crew was flawless tonight — they won us the race.

“They took a lot of heat for what happened last week (a blown pit stop at Michigan resulting in a 20th-place finish). We’ve had a terrible streak of bad luck. We’ve had super-fast race cars. … I knew the bad luck would stop coming, and we’d start racking ’em off … The pit crew’s done a great job, but they did stumble last week, and this was a great way to make it up.”

Harvick’s assessment of his crew’s performance stood in sharp contrast to Truex’s. After issues with an air gun during a stop under caution on Lap 281, Harvick restarted 12th after entering pit road with the lead. He spent the rest of the race working his way forward but couldn’t catch Truex on the final 12-lap run.

“Yeah, we had a great car,” Harvick said. “The guys in the garage and at the shop continue to do a great job, and we continue to give it away on pit road. Pretty much summed up the night. Just the dominant car, and just three bad stops on pit road.”

Harvick indicated he was beyond giving encouragement to his pit crew.

“I’m over being a cheerleader,” he said. “Those guys get paid a lot of money to perform on pit road, and cheerleading hasn’t really been working. You’ve got to get after it on pit road and do your job.”