Kevin Harvick pit crew changes have been made as the team’s head into Richmond International Raceway. This comes after a frustrating result at Darlington Raceway last week. In total, 17 spots were lost on pit road and in the end it likely cost the #4 team the win.

Harvick’s former front tire changing crew members Tim Sheets and Todd Drakulich will move to Patrick’s pit crew. This is a very similar change made in the past. The current crew of Kevin Harvick come from Tony Stewart after similar issues in a previous season.

Harvick was very vocal after Darlington Raceway. He’s hard on himself, expectedly, he’s also hard on his crew.

Harvick: “Our team in the garage did a great job. They brought the fastest race car to the track once again and we just didn’t do a good job on pit road and gave it away.”

How much did the race change and how did your car react throughout the night?
Harvick: “We started 12th and eighth and sixth and we had a great race car all night just got to thank everybody in the shop and in the garage for putting the race cars under us. We can’t just continuously shoot ourselves in the foot every few pit stops.” 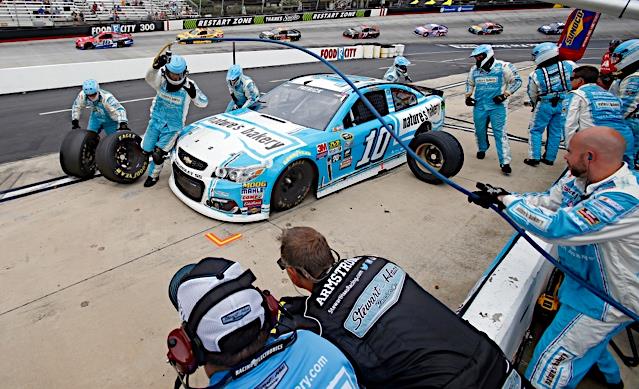 How much in the forefront of your mind were the pit stops on pit road tonight?
Harvick: :Oh, it’s just the same old thing. You get in position where you bring a dominant car. The guys in the shop and the guys in the garage are doing a great job, and the guys on pit road are doing a terrible job. You get in a position to win races, and they continually step on their toes and don’t make it happen. You’re not going to win races like that. I’m really proud of the car that we brought tonight and the things that we’ve done on the race track, but you can only make so many excuses for pit road.”

How do you get it cleaned up before the Chase starts?
Harvick: “That’s a good question for (crew chief) Rodney (Childers).”

How do you balance trying to be a cheerleader?
Harvick: “I’m over being a cheerleader. Those guys get paid a lot of money to perform on pit road, and cheerleading hasn’t really been working. You’ve got to get after it on pit road and do your job.”

Stewart-Haas Racing has stated the Kevin Harvick pit crew changes for this weekend are a temporary solution. It may change again next week.

Kevin Harvick comments on the changes to the 2018 NASCAR schedule